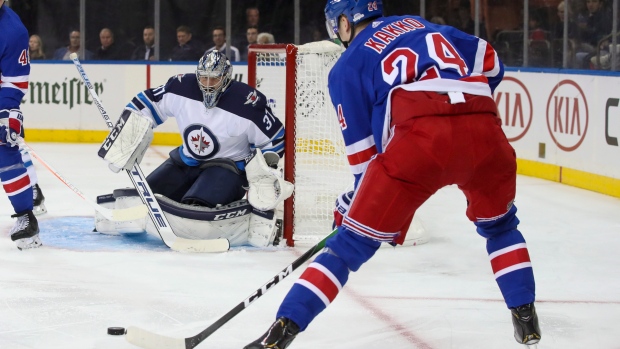 NEW YORK — Cue the clip of Connor Hellebuyck after allowing five goals against at Madison Square Garden in the Winnipeg Jets’ season opener.

There was Hellebuyck, his legendary bravado on display again – a sense of confidence that must be some sort of defence mechanism after efforts that aren’t good enough.

“I liked a lot of my game,” Hellebuyck said. “I felt like I earned better. I felt like I played a lot better than five goals against.

“If I look back at my tape, I probably won’t do a whole lot different.”

On a night like Thursday, when as captain Blake Wheeler said “the majority of that game is pretty, pretty good” for the Jets, those are the type of quotes that produce eye rolls in the dressing room.

That’s all well and good. But the truth is, words don’t mean much in the NHL.

Thursday night’s opening 6-4 loss to the Rangers was one night, one misstep in an 82-game slog. But it perfectly illustrated Hellebuyck’s new normal. There is zero margin for error with this paper-thin Jets’ defence corps.

All of those changes translate to a lot of heavy lifting for Josh Morrissey and a lot of high-event hockey for Hellebuyck.

For the Jets to make it through the murderer’s row that is the Central Division – with four legitimate Stanley Cup contenders – they can’t squander many nights that they score four on the road.

Hellebuyck, now 26, isn’t feeling the pressure to do more with less in front of him. Or if he is, he certainly isn’t saying.

“No, I’m not feeling any more pressure,” Hellebuyck said. “What I’m feeling is I want to feel right in my game. Tonight, I did. This whole preseason, I’ve felt myself building forward and I really like where I’m at.”

If last year was Hellebuyck’s “prove it” season as he called it, where he was supposed to prove that he was a perennial Vezina candidate, then he failed. He dipped from .924 to .913 in save percentage – at a position that’s so incredibly difficult to play well consistently.

But if you allow Hellebuyck to explain, there is reason for optimism that he’ll be up to the tall task this year.

“This training camp, I found my trigger,” Hellebuyck said. “I found what allows me to access all my training and all my core work and tightness. Once I found that trigger, I was clicking. I was moving extremely well.”

Say what? What exactly does that mean?

“It means I’m able to access all of the muscles that I’ve trained so hard to get,” Hellebuyck said.

How does he do that?

“If I told you my secret, then everyone would know,” Hellebuyck said, smiling. “It’s not mental. It’s not in warmup. It’s on the ice. When I do this, it allows both sides [of my body] to feel even.”

Hellebuyck said that the NHL’s mandated changes to the chest protector – changes that limited its size – before last season made it difficult for him to find that “trigger.”

“The new chest pad change really hurt that,” Hellebuyck said. “I didn’t really know what that change was. I’m very in-tune with my game. I built my game a certain way and things changed on me. So I rebuilt it again and I feel good.”

So much of Hellebuyck’s explanation is ‘inside baseball’-type goaltending jargon. But that is the insight into why Hellebuyck says he felt like he “earned better” in a game in which he allowed five goals.

See, there is a method to the madness.

“I don’t want you to mistake me saying I like my game with me being happy with what the result was tonight,” Hellebuyck said. “You always want to win. I’m not happy with losing at all.

“I don’t know, it just seemed like the puck was always in the wrong spot for me.”

Hellebuyck might not say it, he might not outright take ownership the way his teammates would probably prefer. But Hellebuyck has to know that the season – especially this Jets season – might rest squarely on his shoulders.