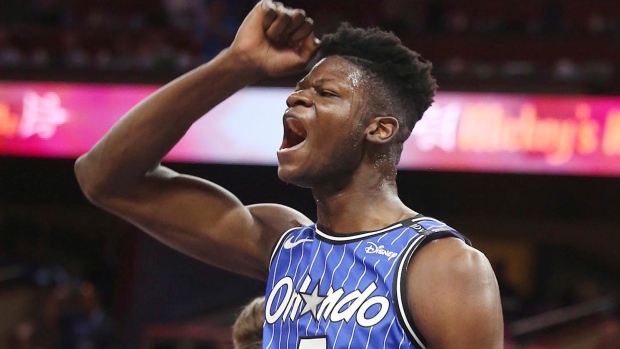 It’s all about ‘what have you done for me lately’ from here on out.

Last week I highlighted three key factors to consider for the playoffs and those principles ring true again this week:

Generally speaking, you can categorize the majority of fantasy players into three buckets: guards, wingmen and bigs.

While wingmen like Paul George can contribute in eight out of nine categories, guards and bigs tend to be more specialized.

With guards, you’re stocking up on threes, steals, assists, and free-throw percentage. With bigs, it’s rebounds, blocks, field-goal percentage and turnovers (most of the time).

SG: Grayson Allen, MEM (13.2 per cent) – Amidst all of head coach Taylor Jenkins’ unpredictable rotations, Allen has steadily carved out 31.1 minutes over the past nine games, averaging 3.2 three-pointers, 2.6 assists, 1.0 steals and 78.6 per cent from the line. He’s compiled a few games in a row of streaky scoring and should be added until he cools off.

PG: Killian Hayes, DET (12.5 per cent) – The 2020 seventh-overall pick has steadily seen his minutes climb since returning from a three-month absence. In his last three games, he’s averaged 7.3 assists and jumped off the stat sheet with a five-steal performance against the Thunder. While it’s clear coach Dwane Casey is a big Cory Joseph fan, the Pickering, Ont. native missed Sunday’s game with bronchitis. Should he miss additional time, that’s all upside for Hayes.

PF, C: Daniel Gafford, WAS (8.0 per cent) – My colleague Fabio Lucarini already spotlighted Gafford for the week and I want to further endorse him as a big-man streamer. After joining the Wiz mid-season, Gafford has provided some light at the centre position. In fantasy, the main hurdle for his case will be coach Scott Brooks’ rotation. If Gafford can get his minutes into the 20s (18.1 MPG over past two weeks), he’d be floating around 15 points, 8 rebounds, 2.5 blocks with a 65 per cent clip from the field. He just needs Alex Len or Robin Lopez to be relegated to bench duties.

This week’s schedule is slightly more balanced. Eleven teams have three or fewer games compared to next week when it’ll be just five.

Double check you’re not benching multiple players for Wednesday’s slate. If you have someone there, swap them out for a player that has games Tuesday and Thursday.

PF: Chuma Okeke, ORL (26.0 per cent) – Orlando plays Atlanta tonight and gets a home date with New Orleans Thursday. They’re one of three teams to play both days. As the rookie continues to build up his confidence and earn more rotation minutes, his production should maintain a positive trendline. His shooting has been inefficient of late, not uncommon for rookies, but he’s evolving into a sneaky 'three-and-d specialist’ averaging 1.7 threes, 2.0 steals and 1.3 blocks over the past week.

PF: Jalen McDaniels, CHA (17.3 per cent) – Gordon Hayward, LaMelo Ball, and Malik Monk are out injured. Cody Zeller and Bismack Biyombo have been bumped out of the rotation. McDaniels has emerged as a late-blooming fantasy asset just in time for the fantasy playoffs. Charlotte has two road games, Tuesday in New York and Thursday in Chicago. McDaniels has started the last seven games, averaging 32.1 minutes and provided some balanced nine-cat stat lines with an emphasis on steal production (1.9).

3. Get ahead of injuries

If you haven’t noticed, bodies are dropping left, right and centre across the league. The schedule hasn’t been kind to the athletes and unfortunately the door has been opened for bench players to step up.

PF: Davis Bertans, WAS (16.5 per cent) – Rui Hachimura left Washington’s game on Saturday and was ruled out of yesterday’s game well ahead of tipoff. Should he miss additional time this week, there’s upside on the table for Bertans who was 61st in fantasy basketball last season. He’s played seven games in April averaging 14.7 points and 4.1 threes on 50.8 per cent shooting. As an efficient three-point specialist, if he could slip in a steal or two each game this week, he’ll be a great streaming asset.

C: Goga Bitadze, IND (1.8 per cent) – Myles Turner is out indefinitely and Domantas Sabonis sat out Monday’s game with a lower back injury. Bitadze was thrusted into the starting five and rewarded managers with a five block performance. Over the first two weeks of April, Turner was out of the lineup for six games and Bitadze was the 140th ranked player overall. He was only playing 16 minutes in that period but averaged 1.7 blocks per game to go along with 1.2 threes. Should they be cautious with Sabonis, Bitadze could seal the blocks category for your matchup.