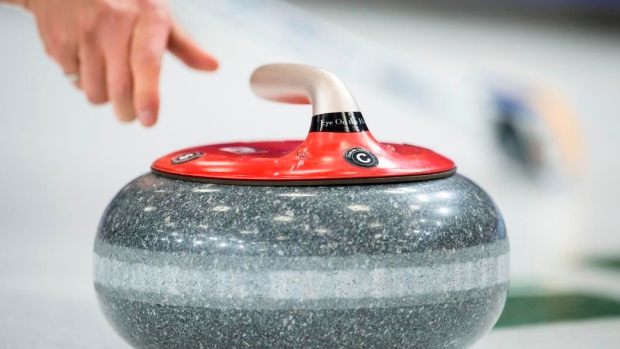 Ads for a sex toy website that led to a U.S. blackout of an Olympic curling qualifying tournament will be removed from the ice and replaced with the statement “#equalityforall.”

“During an Olympic qualifying tournament, it must of course be about the sport and not about the sponsor,” Eric Idema, CEO of EasyToys parent company EDC, said in the statement, which was emailed to The Associated Press and translated from Dutch. “Curling also deserves that, as a sport that is one of the few mixed sports that is way ahead of its time. In fact, just like us.”

The tournament began Sunday with mixed doubles, but American fans were unable to watch their local livestream due to what the World Curling Federation said was “an ongoing sponsor rights issue.” Still available was an international livestream where viewers could see the EasyToys safe-for-work logo on the ice and on ads surrounding the rink; the company’s name was also embedded in the hog line that determines where curlers must release the stone.

“We hoped that our visibility would contribute to breaking the taboo that still rests in many countries on both sexuality and on our industry,” Idema said. “It is unfortunate that adjustments are now needed to get the sport to the fans.”

According to the company, when the tournament resumes on Saturday “almost all” EasyToys logos — which depict a pair of hearts nestled into the company name — will be removed from in and around the rink. It will remain on one sheet and the hog lines will remain “EasyToys pink.”

Instead, the ice will feature the hashtag calling for equality.

“With this slogan, we still want to start the conversation about sexual wellness and the importance of safe and pleasant sex for everyone,” Idema said. “In many countries that conversation is already well underway, but the boycott confirms to us that we must continue to work on this topic normalize it for a wider audience.”

The event in Leeuwarden, about 90 minutes north of Amsterdam, is a last-chance qualifier that will send two teams in mixed doubles and three each in men’s and women’s to Beijing in February. The United States pair of Chris Plys and Vicky Persinger qualified in mixed doubles, along with a duo from Australia; there is no U.S. team in the other divisions because the Americans had already qualified for the Winter Games.

“EasyToys and the World Curling Federation entered a sponsorship contract for this event in good faith, based around the shared values of equality and respect for everyone,” the international governing body said in a statement.

“The legal guidelines along with social norms that influence the broadcaster’s policies in certain parts of the world, have proved to be a complicated barrier to showcasing this championship,” the WCF said. “This action has been taken to avoid any further distractions to our athletes as they seek to achieve their dreams of reaching the pinnacle of our sport.”