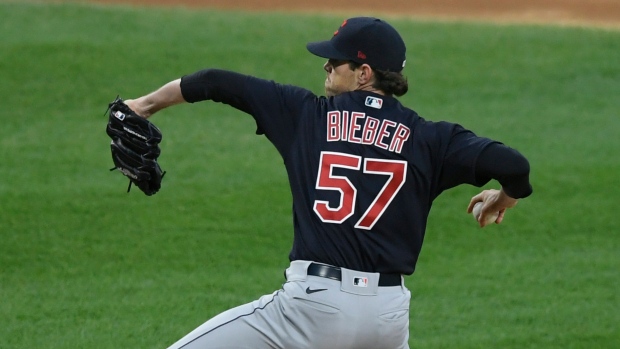 CINCINNATI — Shane Bieber kept up his record strikeout run, fanning 13 and pitching Cleveland past the Cincinnati Reds 6-3 on Sunday.

Bieber (2-1) become the first pitcher in big league history to begin the season with four straight starts with at least 10 strikeouts.

The AL Cy Young Award winner has 48 strikeouts this year, matching Hall of Famer Nolan Ryan for the most through the first four start of a season. Bieber has fanned at least eight in a 16 straight starts, one short of Randy Johnson’s major league mark.

Emmanuel Clase struck out the side in the ninth, again hitting 100 mph with his heater.

Cleveland hit three home runs, all with two outs, to salvage a win in the all-Ohio series.

Roberto Pérez hit a three-run homer off Wade Miley (2-1) over the centre field wall with two on in the fourth inning for a 4-0 lead.

José Ramírez launched a solo drive into the upper deck in the first. Jordan Luplow had a two-run homer in the seventh.

Wade Miley (2-1) took the loss for the Reds, lasting five innings and striking out five.

Joey Votto had three hits, including a two-run double in the Reds fifth. Tyler Naquin homered off Bieber in the eighth.

Reds 3B Mike Moustakas missed his third straight game with a non-COVID illness. Kyle Farmer started in his place. OF Shogo Akiyama (hamstring) is back with the team, but it not expected to play until at least May.

Cleveland: After an off day, open a nine-game homestand Tuesday with a pair against the White Sox. The teams split a four-game series last week in Chicago. Cleveland sends RHP Zach Plesac against LHP Carlos Rodón, who threw a no-hitter against them in an 8-0 White Sox win Wednesday.

Reds: After an off day, RHP Luis Castillo (1-1) will be on the mound Tuesday night to open a three-game home series with Arizona. RHP Zac Gallen (0-0) starts for the Diamondbacks, who took two out of three from the Reds in a series earlier this month in Phoenix. Castillo struck out seven in a no-decision on Tuesday. Coming off the disabled list, Gallen struck out eight over four innings in Tuesday's loss to the A's.