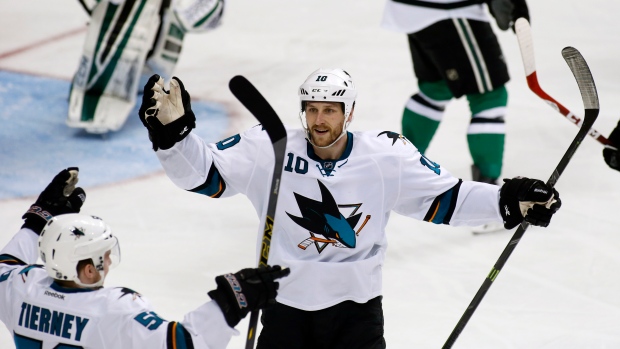 DALLAS - Andrew Desjardins and his San Jose teammates were in the right places Thursday night.

Desjardins scored two goals 2:37 apart in the second period and the Sharks held off the Dallas Stars 5-2.

First, Tomas Hertl's shot hit Desjardins' stick on the way to the upper right corner past Dallas goalie Kari Lehtonen. Desjardins' second goal came when his wrist shot from above the right faceoff circle beat Lehtonen for a 3-0 lead.

"I told them I was going to the net, so it's just trying to get pucks on net and go there hard," Desjardins said. "(On the first goal), I think I just kind of got lucky, to be honest with you. It hit my stick and went in. It was a great shot by Hertl. I don't think (Lehtonen) saw it.

"And then the second one, good job by Hertl. It doesn't go in if he's not in the crease."

After that shot, Lehtonen wasn't in the crease, either. Stars coach Lindy Ruff pulled the goalie after he gave up three goals on 17 shots in a span of 26:15.

"It was just a little momentum change," Ruff said. "We needed an effort out of Jhonas (Enroth), and he gave it to us. I wanted to rest (Lehtonen). We have five games in eight nights.

"I don't think any of those goals you can fault Kari. The second one hit the shaft of a stick, and he was screened on the third one."

The Stars fought back within 3-2 on Trevor Daley's power-play goal in the second period, and Erik Cole's goal with 2:16 remaining in the third after Enroth had been pulled for an extra skater.

"We go up 3-0, and now we want to defend perfectly," Sharks coach Todd McLellan said. "We want to be in position and we're a little more tentative. We're only in defensive mode."

With Enroth still out, San Jose's Patrick Marleau and Tommy Wingels scored into the empty net to seal the victory.

Hertl and Joe Pavelski had two assists each for San Jose. Daley had a goal and an assist, and Jamie Benn assisted on two goals.

Antti Niemi made 37 saves for the Sharks, who had lost two straight.

"They play a tight game and they play a good group of five, and their goalie's pretty good," Benn said.

The victory vaulted San Jose into a tie for seventh place in the Western Conference with Calgary, tied for third in the Pacific Division.

The Stars had won four of their previous five games. They fell six points behind Calgary and San Jose in the race for the final wild-card berth.

Dallas lost despite outshooting the Sharks 39-28 for the game, and 15-4 in the third period.

Enroth held San Jose scoreless while making nine saves before the Sharks got their empty-net goals.

NOTES: Vlasic had not scored a goal in his previous 14 games since Jan. 6. ... In 46 career games against Dallas, Pavelski has 39 points (16 goals, 23 assists). ... San Jose's Brenden Dillon and the Stars' Jason Demers, traded for each other in November, each played for the first time against his former team. Dillon had an assist. ... LW Brendan Ranford made his NHL debut for the Stars. He's the nephew of Los Angeles Kings goalie coach Bill Ranford. ... Benn has 15 points (nine goals, six assists) in his last 12 games. ... Jason Spezza's assist on Daley's goal gave the centre a seven-game point streak with 11 points (three goals, eight assists). ... Lehtonen had been 4-0 with a 1.49 goals against average in his previous four games. ... Dallas sent D Patrick Nemeth to Texas of the AHL. He hasn't played since Oct. 18 because of an arm laceration.