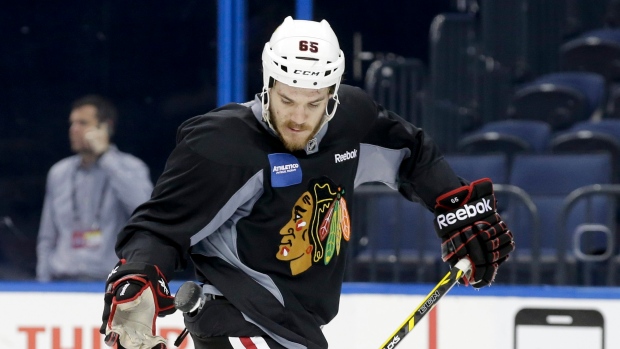 "I mean it's a hockey game," Shaw said Friday. "He's one of the best players and he's a highly skilled, big, strong defenceman with a lot of speed and he went after one of our better players.

"It creates the scrums, and just battle out there. I expect battles with him at the front of the net the rest of the series, as well."

The Chicago Blackhawks forward said he wasn't "going to get into the details."

"Things happen during games," Hedman said. "I'll leave it at that."

Hedman shoved Blackhawks star Patrick Kane into the boards after a whistle late in the first period, and Shaw went after him. Upon returning to the bench, Hedman lifted up his jersey and appeared to tell assistant athletic trainer Mike Poirier that Shaw bit him.

"Everyone who watched that could see what I said," Hedman said. "If you saw that, I don't have to say anymore."

Hedman brushed off Shaw not being disciplined by the NHL for biting, saying: "It's hockey."

The 23-year-old Shaw isn't concerned about retaliation from the Lightning.

"I expect they're going to come out and play hard," he said. "They're a great team with a lot of skill, a lot of speed. It's going to be a long series."