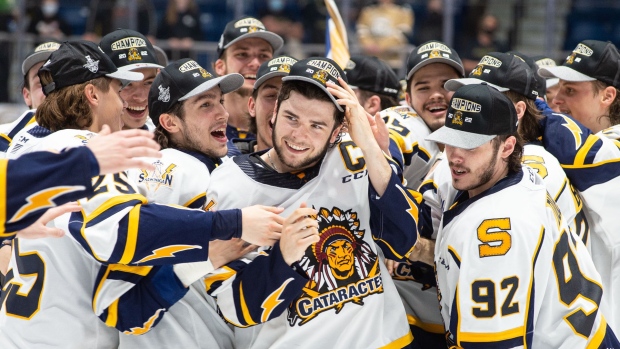 This is OHL-champion Hamilton's first game since a tournament-opening 5-3 loss to the host Saint John Sea Dogs on Monday. The QMJHL-champion Cataractes won their first game on Tuesday against the Edmonton Oil Kings, 4-3.

Hamilton excelled in the power play on Monday with two goals, but they were outscored in even-strength play 5-1.

Ryan Winterton, an unsigned draft pick by the Seattle Kraken in last year's draft, led the way with two goals and Logan Morrison tallied three assists on the night. Morrison is eligible for the upcoming draft.

The Bulldogs are looking to Mason McTavish, who was drafted third overall by the Anaheim Ducks in the 2021 NHL Draft, for more production. He spent time in the NHL this season and while with the OHL team has a strong point pace of 1.66 per game but was held pointless on Monday with a minus-1 rating.

Shawinigan will look to build off their victory over the Oil Kings two days ago, where they scored two late goals to steal it.

The Cataractes are led by QMJHL playoff MVP Mavrik Bourque, a first-round pick by Dallas in 2020, and Xavier Bourgault, the Edmonton Oilers top selection in 2021. Bourgault and Bourque were first and second stars of the game on Tuesday; Bourgault registered a goal and an assist and Bourque contributed two assists.

Each player was credited with an assist on the game-winning goal just under seven minutes into the final period.

In net for the Cataractes in their first game of the Memorial Cup was Charles-Antoine Lavallee, but Antoine Coulombe saw the majority of starts in the regular season and QMJHL playoffs. Lavallee stopped 27 of 30 shots for an .893 save percentage on Tuesday.

Marco Costantini has been the primary netminder for the Bulldogs this season and he started the game on Monday, where he saved 30 of 34 shots.

The Memorial Cup runs until June 29.