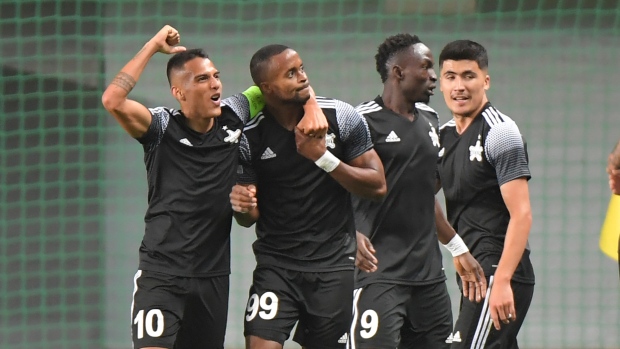 TIRASPOL, Moldova (AP) — Sheriff Tiraspol had a Champions League group stage debut to remember as the team from a breakaway region of Moldova beat Shakhtar Donetsk 2-0 on Wednesday.

The game took the Champions League to a new frontier. Sheriff is the first club from the Moldovan league to qualify but it’s based in the breakaway region of Transnistria, a self-proclaimed independent nation which isn’t recognized by any United Nations member state.

With funding from the Sheriff company, which runs large parts of the economy in Transnistria and has strong political ties, the club built a team capable of pushing past former European Cup winner Red Star Belgrade in qualifying.

Sheriff started against Shakhtar with an all-foreign lineup including a Greek goalkeeper, a midfielder from Luxembourg and a forward from Uzbekistan. Shakhtar had its usual core of Brazilian players.

Sheriff took the lead in the 16th minute when full-back Cristiano crossed for Adama Traore to fire an acrobatic volley past goalkeeper Andriy Pyatov, who was slow to react. Cristiano crossed in the 62nd on another quick break for Momo Yansane to head in Sheriff’s second goal.

Defeat was a disaster for Shakhtar, which beat Real Madrid home and away last season. Sheriff goalkeeper Giorgos Athanasiadis made a string of saves, including stopping a dangerous deflected effort by Marlos early in the second half.

The playing surface in Tiraspol posed problems with Shakhtar players frequently slipping as chunks of turf broke away.