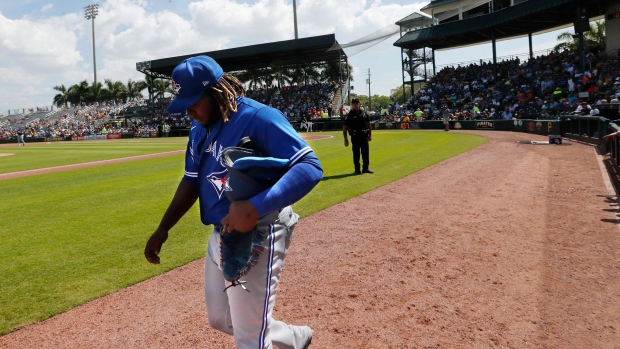 TORONTO — Shifting Vladimir Guerrero Jr. across the diamond to first base has felt inevitable for a long time now.

Big picture, it’s about much more than that for the Toronto Blue Jays.

This is about the shift from a development-focused era to one where the expectation is winning.

The Jays are a better team now than they were back in March when the plan was still to give the 21-year-old another season at the hot corner to see if he could make it work.

Both the eye test and the advanced metrics — his minus-9 Defensive Runs Saved mark was 30th out of 32 third baseman to play at least 500 innings at the position last season — were evidence that it probably wouldn’t.

Now, with only 60 games of development time instead of 162, the plan has changed.

The 2021 season has long been the year that the Blue Jays front office eyed as the time a contention window would start to creak open.

Having Guerrero Jr. comfortable at his new position heading into next year is now a goal, one that should allow the former top prospect in all of baseball to focus on what’s really going to make him special: The bat.

There’s also the chance something unexpected happens in 2020, and Travis Shaw —15th out of 32 third baseman with a plus-1 DRS — is the best glove they have at the hot corner.

“It’s all about a player having the best chance to compete,” Jays manager Charlie Montoyo said. “It’s going to be a short season so, for me, the best chance for Vlad is to play first base, DH, and also play third. Me knowing that Travis Shaw can play third because I’ve seen him, and he’s a good third baseman, also helps that. But this is more about Vladdy and giving him a chance to succeed in a short season.”

In the front office, they can see the pieces falling into place for the long-term, too, something many have projected for a while now.

Vladdy Jr. is all-in on the position switch, something that was talked about back in spring training as a potential option at some point this season if it was clear the glove had not made strides.

The first person he plans to call is Albert Pujols, who made the exact same tour down the defensive spectrum in his early days with the St. Louis Cardinals, coming up through the minor-league system as a third baseman before eventually shifting permanently into a future first ballot Hall of Famer at first base.

Combine less responsibility defensively with improved core strength from a winter of work, and Guerrero Jr. should be ready to improve on the .272/.339/.433 slash line from his 123-game rookie season.

“I feel very good about it,” Guerrero said through team translator Tito Lebron. “I did what I could. I feel good, and I’m ready. I’m ready for the season to start and to help my team win. I’m good. My body feels great.”

While Montoyo says Guerrero still could see time at third base — there’s no reason he can’t play a handful of games there when the lineup and health of others dictate — at some point he’s going to lock down first base permanently for, hopefully, the next decade.

That leaves anyone else with a first base mitt on the outside looking in, but Rowdy Tellez, who profiles best as a DH, has been impressed with the transition early on.

“He’s always asking questions,” Tellez said. “He wants to learn. He’s always trying to be better. He’s a great teammate to start with so he’s not too worried about certain things of playing time or any of that, he just wants everybody to be happy and everybody to be at their best.