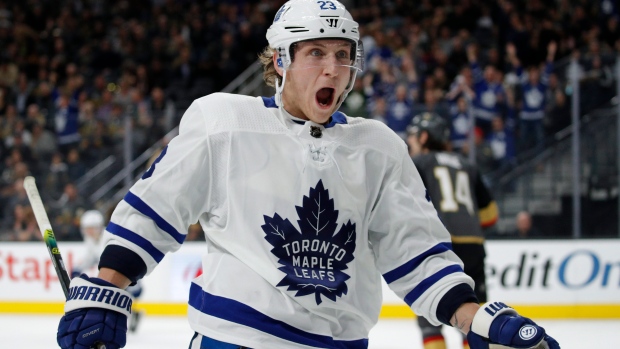 TORONTO — By the time restricted free agent Travis Dermott signed a one-year, $874,125 contract extension with the Maple Leafs on Friday, Toronto had already crowded its blueline with offseason additions like T.J. Brodie, Zach Bogosian and Mikko Lehtonen. That kind of depth will make roster spots especially hard to come by next season, a prospect that Dermott actually delights in.

"It’s exciting. I always like a good competition," Dermott told reporters on a Zoom call Saturday morning. "We'll see how [training] camp goes, whenever that gets started. We are just going to be that much better with that much more competition. It's going to get guys to push each other, and really force guys to be their best version of themselves and be really prepared come camp time."

That message rings especially true for Dermott, who projects to be battling it out with Lehtonen, Justin Holl, Rasmus Sandin and Martin Marincin for a third-pairing role next year.

The fourth-year pro is coming off the worst statistical campaign of his young career in 2019-20, with just an 11-point effort in 56 regular season appearances. Dermott had started out by missing the first 13 games of the season recovering from offseason shoulder surgery, and he admits that continued to have an effect even after he returned to the ice.

"[After the] injury, I don't think I came back as fast and as dominantly as I wanted to," Dermott said. "So you learn through those experiences. We have such good teammates in Toronto that you're learning all the time. I got a lot of big D back there that I can look up to and guys that'll show me the way so it's just keeping eyes and ears open I think. You just try to learn as much as you can and go forward and on a better foot."

It certainly wasn’t the year Dermott envisioned having before negotiating a new contract, either. For weeks he saw general manager Kyle Dubas using the Leafs’ limited cap space to scoop up fresh faces, and Dermott admitted the wait for his turn at the table was "nerve-racking." In the end, Dermott settled on a one-year pact, in part because of the financial strain that COVID-19 has placed on clubs in the form of a flat salary cap.

"There's a lot of stuff going on in the world, and it's going to take its toll on everything I guess," Dermott said. "And that's what was explained to me from my camp, so it affected [our] stuff a little bit. But at the end of the day, I just want to be playing hockey and whatever number is there is the number that's there so I'm just honoured to be back and excited to go play."

Given the influx of new talent, Dubas said in a media availability this month that Dermott was a likely candidate to switch from his natural left side to the right side if needed. That’s just fine with the 23-year-old, who previously spent time on his off-side playing for the Ontario Hockey League’s Erie Otters and dabbled with it here and there as a pro.

"I love the right side. It's nice," Dermott said. "There’s a lot of parts of the game that I like better on the right side, or that I find easier. In the offensive zone you're more available for a quick shot from your partner. Some breakout stuff is easier because your body is more open to the ice. There's a lot of times around the ice that it's completely different from left to right but there's some things that when I'm out there on the right definitely feel nice. I'm not scared of that task at all and it's pretty exciting."

Dermott said a key to his training in every offseason is taking reps on both sides of the ice anyway, so he’s available for whatever head coach Sheldon Keefe needs. More than worrying about his handedness though, Keefe will be looking for Dermott to showcase his best game when looking to fill those defensive slots.

"There’s a lot of great things that Derms does for us," agreed Keefe, in a media availability on Oct. 7. "We just need to see a level of consistency and reliability. That’s part of the process for most young players. He's shown at different times that he's able to step up and we were able to win games against very good teams with him playing a prominent role so that potential is there."

It’s been months now, going back to the Leafs’ qualifying-round playoff loss to Columbus in mid-August, since Dermott has really thought about the intricacies of his game, a fact he couldn’t help pointing out on the Zoom call. But when he thinks about being at his best, Dermott has a simple plan of attack.

"It's playing hard, it's not playing tentatively," he said. "It's using my feet, skating fast, but making sure my defensive stuff is done first and then from there you move forward. It's what you build for yourself, like a little portfolio of the things you do well. And Keefer and I have grown through the years and I've understood how my portfolio has grown, and it's just bringing that every night and trying to be as consistent as I can with it."

Until there’s a set schedule for the NHL’s 2020-21 season, Dermott will keep refreshing his skill set at Toronto’s practice facility, where a group of Leafs have been hard at work for weeks. It’s a group led by "power horses" like Zach Hyman and Jason Spezza and Dermott stayed among them even before putting pen to paper on his deal. Because not only is Toronto literally home for the Newmarket, Ont., native, it’s where he wants to not just play hockey, but excel at it.

"I like to keep everything certain. I knew I wanted to stay in Toronto," he said. "My options were obviously limited [by being an RFA], but [my agent] knew that I wanted to get it done pretty quickly. It's looking good now. And for me, learning from last season, you want to learn from playoff experience, the [playoff] bubble experience, which was really cool. You try to take little things from those experiences and use them working forward."