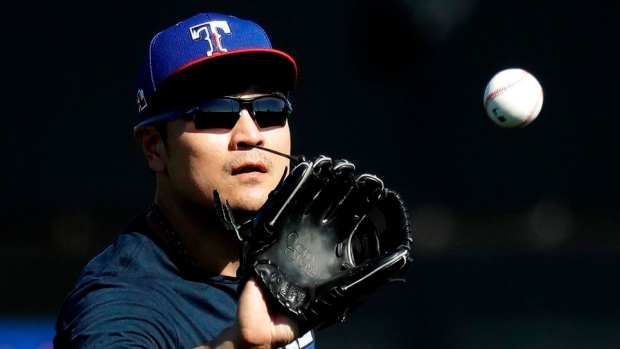 SURPRISE, Ariz. — Shin-Soo Choo wants to enjoy baseball even more this season, all of those times in the clubhouse and on the field while still at the top of the Texas Rangers lineup.

"I don't know what's going to happen at the end of the year," said Choo, the 37-year-old leadoff hitter going into the final season of his $130 million, seven-year contract.

Choo has genuine confidence that he can play at a high level for another couple of years, or more, after 2020.

There is just no way to know if he will be re-signed by the Rangers, maybe go to another team or decide it's time to be at home full-time with his wife and three growing children. Those are all questions he said are too early to consider.

His oldest kid is a 14-year-old son who is a high school freshman playing baseball and football. Choo flew home to Texas last weekend to watch one of his baseball games.

“He's the most professional player, person,” manager Chris Woodward said. “I truly value the person and what he can do. And, you know, I still think there's a lot left physically just based on the way he prepares himself, the shape that he keeps himself in."

Choo will be the highest-paid Rangers player this season, at $21 million for the final year of his back-loaded deal. The only longer-tenured Texas player is 31-year-old shortstop Elvis Andrus, who is entering his 12th season.

Texas signed Choo as a free agent the same off-season it acquired Prince Fielder in a trade from Detroit, when the All-Star slugger had seven seasons left on a nine-year contract. Fielder was forced to retire midway through the 2016 season, at age 32, after a second neck surgery over a three-year period.

Choo, who turns 38 in mid-July, was coming off a career-high .423 on-base percentage during his only season with the Cincinnati Reds when he got to Texas. He is still having productive seasons for the Rangers.

Corey Kluber, a two-time AL Cy Young Award winner known for his own hard work ethic and attention to detail, made his major league debut in 2011 with Cleveland when Choo was with the Indians.

“'When I first got called up, you noticed right away the way he goes about his business. So I tried to try to pay attention to that a lot,” said Kluber, who was traded from Cleveland to Texas during the off-season. “It definitely impact on me when I was younger.”

Choo has averaged 149 games over the past three seasons, since being limited to 48 games in 2016 because of four stints on the disabled list for different injuries each time.

He has had at least 20 homers and 75 walks in each of the past three seasons, becoming only the third Rangers player to do that. The others were Rafael Palmeiro's record five in a row (1999-2003), and Alex Rodriguez from 2001-03. Palmeiro and Adrian Beltre are the only other Texas players with at least 24 homers in a season at age 36 or older.

“I think he's gotten smarter. His ability to control the strike zone and get on base," Woodward said. "Pitch one, he is the most prepared player I've seen. He doesn't take one day for granted. He's there. He's the earliest there every day. He'll talk about the game all the time.”