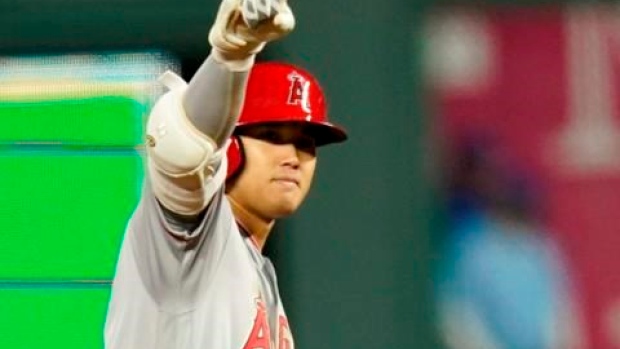 Ohtani had three hits and three RBIs, including a double that left the bat at 119 mph and helped the Los Angeles Angels over the Kansas City Royals 10-3 Monday night.

"Did you see that?” Angels manager Joe Maddon marveled. “He’s an impressive athlete and he has lots of confidence right now.”

Ohtani is back to a two-way player this season after being limited to two pitching appearances last year in his return from Tommy John surgery, He reached 100 mph on nine pitches in his first start this season, topping at 101.1 mph with an offering to Adam Eaton of the Chicago White Sox on April 4.

His two-run double in the seventh off the Royals' Scott Barlow gave Los Angeles a 6-3 lead. That 119 mph drive was fifth-hardest-hit ball since 2015, according to Statcast.

Ohtani added an RBI double against Jake Newberry in the ninth.

Mike Trout, following Ohtani in the batting order, hit his fourth home run of the season, a two-run drive in the ninth.

He allowed three runs, four hits and one walk in 5 2/3 innings.

“When things are rolling it takes you back to some of your prime days, but that’s what I’m working back to,” Cobb said. “I think my splitter has been a little better during spring but that’s the best it’s been in a game.”

Kansas City hurt itself with three errors, including bad throws by centre fielder Michael A. Taylor and by Singer.

Los Angeles took a 2-0 lead in the second following singles by Jared Walsh and Justin Upton. Taylor threw past third following Jose Rojas’ flyout, and then Singer made a bad throw past home as two runs scored.

Salvador Pérez had an RBI single in the sixth for his 1,000th hit and had the eighth four-hit game of his big league career, Jorge Soler’s two-run single cut Kansas City’s deficit to 4-3.

“Sal is special with how he goes about everything,” Royals manager Mike Matheny said. “He puts so much time and effort in for his pitching staff and it gets noticed.”

Angels: 3B Anthony Rendon was placed on the 10-day injured list (strained groin), retroactive to Sunday. and INF Jack Mayfield was recalled from the alternate training site. Angels Manager Joe Maddon said Rendon only out 10 days. In the seventh inning, C Max Stassi was removed due to left thumb irritation.

Royals: RHP Jesse Hahn was placed on the 10-day injured list (right shoulder) and Newberry was recalled from the alternate training site.