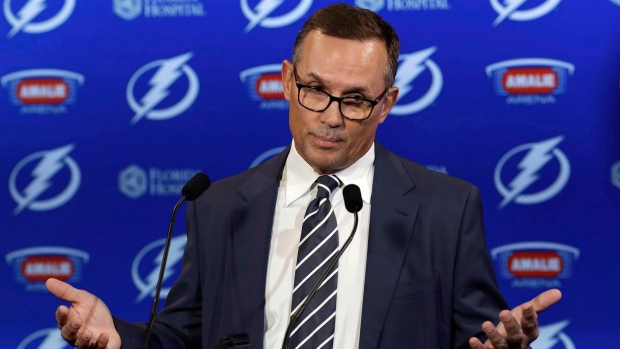 Amid an era of parity, the 60-win Tampa Bay Lightning will go down as one of the best regular-season teams in the history of the game.

But it’s entirely likely that the man responsible for building the Bolts will not be recognized as GM of the Year at the NHL Awards show in June.

That’s because Steve Yzerman stepped down as general manager on Sept. 11, 2018, on the eve of training camp, with one year remaining on his contract. He was succeeded by assistant GM Julien BriseBois.

The name of the GM of the Year Award itself, which was established in 2010, would suggest that Yzerman is ineligible since, well, he wasn’t actually a GM during the year.

“Officially, the GMs will vote for three of the 31 general managers, of which Steve is not one,” said NHL senior executive vice-president for hockey operations Colin Campbell.

However, a straw poll of eight GMs conducted by TSN this week indicated that some managers would consider Yzerman as a write-in candidate for the award.

“This is a unique case,” said one Eastern GM. “I think Steve deserves serious consideration. I’m leaning toward putting him on my ballot.”

“That’s an interesting question, for sure,” one Western GM said. “It’s hard to argue what he left in place when he stepped aside.”

The GM of the Year Award is voted on at the conclusion of the second round of the playoffs by the 31 GMs and a panel of NHL executives, broadcast and print media. There were 39 ballots cast last year; Vegas’ George McPhee, Winnipeg’s Kevin Cheveldayoff and Yzerman finished 1-2-3.

There is precedent for write-in contenders to make it onto the ballot. Dale Tallon received votes in 2010, the first year of voting, for his work building the Blackhawks even though he was already working for the Florida Panthers after being demoted in Chicago.

The Blackhawks captured their first Stanley Cup in 49 years that spring. Phoenix GM Don Maloney was the inaugural recipient.

Like Yzerman, Tallon was not the GM for any part of that Cup season. Stan Bowman took over on July 14, 2009.

“I voted for Dale Tallon. I would have to think about this one,” another Eastern GM said. “It’s an interesting question. Steve did a terrific job.”

The straw poll produced results at both ends of the spectrum. Some of the managers contacted were admittedly uncomfortable about the idea of voting for Yzerman.

“I don’t think there is any question about the job Steve has done building that team, but I don’t think he meets the qualifications,” one GM said. “I probably just wouldn’t go there. But it wouldn’t surprise me if he got some votes.”

“I guess I would have to see what the league’s take on it would be. I would not want to waste a vote,” another GM said. “I’m not sure what the official criteria is for it.”

It will be fascinating to see the NHL’s official tally for the award. Individual ballots are kept confidential, but the league released a breakdown of the 10 managers who received at least one vote last June. McPhee led with 25 first-place votes.

Multiple GMs, even those who would consider writing in Yzerman, said that it would simply be easier to select one of the many other qualified candidates.

Calgary’s Brad Treliving would appear to be the frontrunner, along with San Jose's Doug Wilson, Montreal's Marc Bergevin and the Islanders’ Lou Lamoriello.

That would preclude the Lightning front office from being recognized for the award, but the team’s trophy case will probably be chock full this season anyway, with the Presidents' Trophy, as well as likely finalists for the Hart (Nikita Kucherov), Vezina (Andrei Vasilevskiy), Adams (Jon Cooper) and Norris (Victor Hedman).

Yzerman's candidacy is not a knock against BriseBois. He was unquestionably Yzerman’s right-hand man in Tampa Bay, a key part in the personnel decisions, contract prep and negotiations.

It’s just that Yzerman did most of the heavy lifting. BriseBois has not made any trades of significance since taking over; he swapped Slater Koekkoek to Chicago for Jan Rutta. It was Yzerman who guided the Bolts through the draft and July free agency since 2010.

It was Yzerman who signed Kucherov to the $76 million deal last July 10 that seems like an incredible bargain for the next eight seasons at a $9.5 million cap hit. He navigated turbulent salary cap waters and managed to keep the Lightning mostly intact, locking up Steven Stamkos, Hedman, Ryan McDonagh and J.T. Miller for the long term.

The one cap casualty in Yzerman’s eight-year tenure was Jonathan Drouin. But that straight-up trade for Mikhail Sergachev from Montréal has worked out well and set Tampa Bay up for the future on the blueline.

But this is not a lifetime achievement award, or an award for the best resume as speculation has continued to gain steam about Yzerman returning home to Detroit once his contract expires at the end of this season.

With two games still to play, this year's Lightning (60-16-4) have won 60 out of 80 games, good for third-most wins of all-time. It's an outrageous accomplishment in the salary cap era and Yzerman is deserving of recognition, even if his title is different.

Then again, the GM of the Year Award isn’t even celebration for job security. Of the nine winners, four are no longer at their post, including Yzerman - who was voted by his peers as the top manager in 2014.