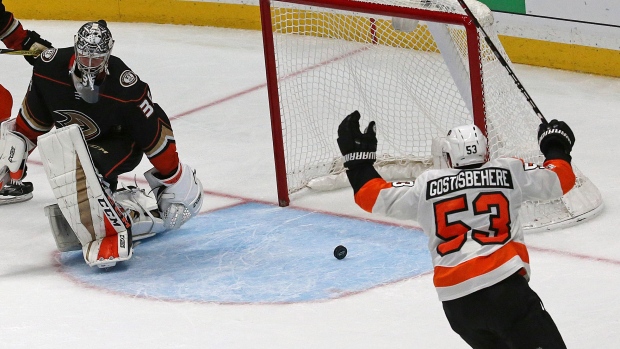 Simmonds scored 44 seconds into overtime to give the Philadelphia Flyers a 3-2 victory over the Anaheim Ducks on Saturday night.

The puck ricocheted off Ducks forward Andrew Cogliano skate and directly to the open Simmonds. He quickly gained control and snapped a shot past goalie John Gibson for the Flyers' second victory in three games.

"It's tough playing out west, there's a lot of big bodies," Simmonds said.

Philadelphia defenceman Ivan Provorov beat Gibson stick-side to give the Flyers the early lead. Assisting on the goal and earning his first NHL point was Nolan Patrick, the second-overall pick this summer.

For the second game in a row, the Ducks allowed their opponents to score first.

"I'd like to see us come out and put teams on their heels instead of vice versa. We haven't in the first couple of games, but the season is still young. I expect us to improve," said defenceman Cam Fowler.

The second period was lacklustre for both teams.

The Ducks did not record a shot on goal for nearly 14 minutes.

The Flyers were equally unremarkable until late in the period when Jakub Voracek wrestled his way toward the Anaheim crease with Ducks draped all over him. The Philadelphia forward sent a beautiful backhand pass to Sean Couturier. All alone in front of Gibson, Couturier slammed home the puck to give the Flyers a 2-1 lead going into the second intermission.

The Ducks were forced to kill their fifth penalty when Vermette was taken off for slashing. Smooth-skating Anaheim defenceman Cam Fowler picked off a puck at the blue line and skated in on a breakaway, sending the puck past Elliott to once again tie it.

The Ducks may have tied the game, but Philadelphia dominated the third period - outshooting Anaheim 15-4. Simmonds attributed it to the Flyers dedication to rolling four lines. Elliott gave credit to the speed of the skaters in front of him. Head coach Dave Hakstol applauded his team's preparation and readiness to face a depleted Ducks roster full of players stepping up to fill the void.

Ducks coach Randy Carlyle was short in his assessment of the game.

"We'll take the point and move on. It wasn't one we could say we played very well in as a whole. We had some spurts, but we didn't really have consistency going."

Flyers: At Nashville on Tuesday night.