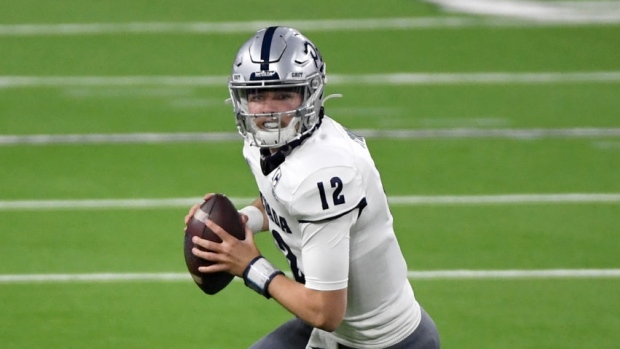 The 2021 NCAA football season launches this week with the soft kickoff on Aug. 28. To get you ready for a new season, I’m going to explore the future plays that stand out to me heading into a fresh slate. For me, futures bets are always a fun way to make the full schedule a little more interesting on a week-to-week basis above and beyond any regular action. Here are the futures I like heading into the 2021 season.

Old Dominion sat out the 2020 season due to COVID-19. Unfortunately, this program is by no means a powerhouse, and it simply couldn’t afford the year off. The last time we saw the Monarchs, they were 1-11 in 2019. Their lone win came against Norfolk State, which plays in the FCS. This season, they will likely be favoured in only one game – against another FCS opponent in Hampton. Beyond that, the schedule is no cakewalk. Old Dominion has another potential win at UTEP, but beyond that, it’s hard to imagine this team getting to four wins. I’ll take the under.

UConn is another team that didn’t participate in the 2020 season. The Huskies went 2-10 in 2019, but that was as a member of the AAC. Now an Independent, UCONN should benefit from a weaker schedule overall. The Huskies also return running back Kevin Mensah, who ran for over 1,000 yards in 2019. UConn has two FCS teams on its schedule in Holy Cross and Yale, as well as another game versus UMass, which was the worst team in the FBS last season with a minus-149 point differential. If the Huskies don’t win all three of those games, they will get a couple more opportunities at the over with home games against Wyoming and Middle Tennessee State. I like their chances to record three or more wins.

Kansas brought in a new head coach in Lance Leipold from Buffalo, who is a proven winner (6 D-3 titles at Wisconsin-Whitewater). Leipold brought with him six transfers from Buffalo that will all see significant playing time this season. The Jayhawks open at home to South Dakota (FCS). They have a game at Duke, which is no world-beater. They also get a home game against a Texas Tech team they lost to 16-13 in a close battle last season. Assuming they get that Week 1 win, they will need one more victory the entire season to get the over.

This team has undoubtedly lost some offensive firepower in the running back tandem of Javonte Williams and Michael Carter, but they return quarterback Sam Howell, who might very well be the first quarterback drafted to the NFL in 2022. They also landed Tennessee transfer Ty Chandler as well as British Brooks, a decent duo at running back. The hire of Mack Brown was doubted by many a few years back, but he has silenced all of his doubters since. North Carolina’s toughest competition in the division will be a Miami team that has a quarterback coming off a torn ACL and has to travel to Chapel Hill. With no Clemson or BC on the schedule, there is a real chance that the Tar Heels go undefeated in conference play this season. I’d even consider taking UNC over 9.5 wins as well.

The Gophers are coming off a bit of a down year last season after a historic 11-2 run in 2019. However, they return some key players in quarterback Tanner Morgan and 1000-yard rusher Mohamed Ibrahim. Meanwhile, the odds depict a much bigger gap between Wisconsin and Minnesota than what we can actually expect from them on the field. The Badgers are -120 to win the Big 10 West. The Gophers are +900. Minnesota will also get Wisconsin at home in the final game of the season, which could ultimately decide the winner of the division. As Gophers head coach P.J. Fleck would say, “row the boat” with this long shot value play.

After going 7-2 last season, Nevada returns with the best player in the conference in quarterback Carson Strong, who some project as a first-round pick in the 2022 NFL Draft. Strong also gets his top rusher and top receiver back in Toa Taua and Romeo Doubs, respectively. While Boise State is the favourite to win the conference at -125, the Broncos just lost head coach Brian Harsin to Auburn and there could be a small adjustment period. If I had to pick the winner of this conference, I would take Nevada. So, I simply can’t pass getting them at +450 to win it.