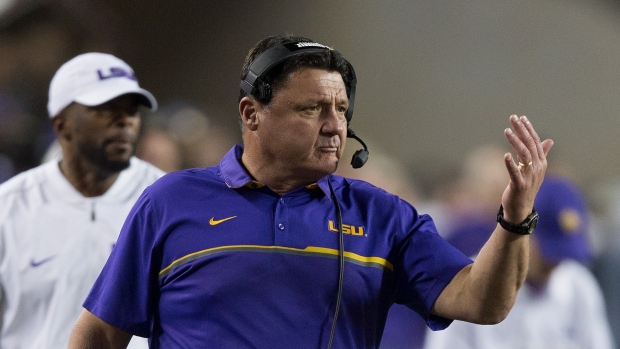 While no ranked teams meet on the field this weekend, that doesn’t mean the college football world has been quiet.

Despite winning last weekend, LSU announced that head coach Ed Orgeron will be replaced at the end of the season, only two years after winning the FBS national championship.

It will be very interesting to see how his players respond as the Tigers head to Oxford to take on Ole Miss, which may be without Heisman Trophy candidate Matt Corral, who was banged up in a win over Tennessee last weekend.

Meanwhile, Nick Rolovich is out as head coach at Washington State. The Cougars have won three straight games, but that locker room will obviously be dealing with a lot following Rolovich’s sudden dismissal.

Washington State will host a BYU team that is coming off two straight losses and will be hungry for a win.

You don’t need ranked teams playing to make a Saturday more interesting. That is what these picks will do.

Here are my best bets for this Saturday’s NCAA football.

Wake Forest has far and away been the surprise team in the ACC. This team came into the year as +8000 to win the conference and after seven weeks they now control their own destiny at the top. This is despite losing Heisman Trophy candidate Kenneth Walker to Michigan State in the transfer portal. One of the big reasons for their drastic improvement has been their defence. In 2020, the Demon Deacons gave up 32 points per game. This season, they have cut that number down to 21. Quarterback Sam Hartman has been solid, but this will be a tough matchup against this Army defence. The Black Knights have one of the best run defences in the NCAA, so Hartman will likely have to beat them through the air. Army’s offence has slowed down since the injury to quarterback Christian Anderson. I hate going against the Troops, but think even if Anderson goes here, it will a banged up version. I’ll take Wake Forest -3.

As mentioned above, it was announced this week that Coach O will no longer be the head coach at LSU at season’s end. The timing of the announcement is certainly strange, and it will be interesting to see how his players respond. In addition to the coaching change, LSU is beat up on defence. While Corral is questionable to play on Saturday, Ole Miss is an offensive machine. LSU was lucky to score 49 points last week as Florida kept turning the ball over. I think the Lane Train will run it up on his old friend here, no matter who starts at quarterback.

It will be very interesting to see how this Washington State team shows up on Saturday. They are coming off three straight wins and were starting to build momentum, but they must deal with their head coach and four assistants being fired. Meanwhile, BYU is coming off back-to-back losses and their momentum has slowed since an early season upset win over Arizona State. For Washington State, this could be a rallying cry or things could go off the rails. One thing I did notice though was the players gave Rolovich a Gatorade shower after the win last week, knowing this outcome was a possibility. I’m going to take the chance on them rallying this week and will take the points with the home team.

Toledo was the favourite to win the MAC heading into this season at short odds (+200) and has disappointed. Coming off back-to-back conference losses to Central Michigan and Northern Illinois to fall to 3-4, it will be interesting to see how they respond against a Western Michigan team that is 5-2, including a win over a good Pittsburgh team. While they did no-show against Ball State, this Broncos’ team can put up points. With the Rockets still trying to figure out who their quarterback is, I like the Broncos to keep the momentum going in their quest for a MAC title.

This season has been a disaster for Miami. In addition to a 2-4 start, the Hurricanes have lost their top two offensive stars for the remainder of the season in quarterback D’Eriq King and running back Cam’Ron Harris. Miami did play North Carolina tight last week, but after falling short, head coach Manny Diaz looked like a defeated man. On the other hand, NC State has really surprised with a 5-1 start, including a win over Clemson. They blew out a solid Boston College team on the road last week and have a good quarterback in Devin Leary. On top of that, Miami’s stadium is about a 40-minute drive from their campus, and I’m not expecting a very lively crowd following a 2-4 start, which should eliminate any significant home-field advantage. I’ll take NC State minus the field goal.