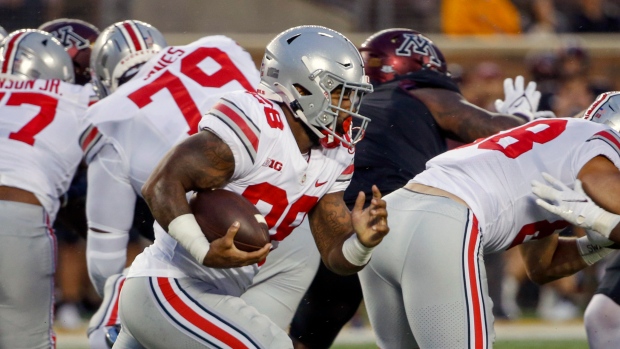 What a great feeling it was last week to have a full slate of NCAA football games on the schedule and, just as importantly, to have the college atmosphere back to what it used to be prior to the pandemic hitting last year.

If you did not see the Virginia Tech “Enter Sandman” entrance, go watch it as soon as you can. That’s what college football is all about.

This week, there are only two matchups between ranked teams. No. 12 Oregon travels to Columbus to take on No. 3 Ohio State at noon on Saturday. Later in the day, we get the battle of Iowa as the No. 10 Hawkeyes go to Ames to take on the No. 9 Iowa State Cyclones.

As always with college football, new players and storylines emerge by the week and I’m looking forward to that continuing.

Based on what we’ve learned so far this season, here is what I like for this Saturday’s NCAA football slate.

Ohio State started slow in the first half last week, trailing Minnesota by four at the half. However, head coach Ryan Day made some significant adjustments at the break, and the Buckeyes outscored the Golden Gophers 35-17 the rest of the way en route to a 45-31 victory. Ohio State will look to build off that momentum this week. There were rumblings in the off-season that Master Teague would not be the primary running back for this team and we saw that last week with the emergence of Miyan Williams. Also, keep an eye on TreVeyon Henderson, an electric playmaker who scored a 70-yard touchdown last week and should see more touches going forward. The Buckeyes also boast the best receiving core in the country. However, the Ohio State defence really struggled versus the run last week, which plays to a strength of the Ducks offence. Oregon could be without defensive end Kayvon Thibodeaux, a potential top pick in the 2022 NFL Draft. I think the Buckeyes will put up a ton of points and win this game outright, but it’s hard to lay the 14.5 here based on concerns about their defence. I’ll take the over in this one.

This matchup jumped off the page at me when I was doing my research this week because I didn’t expect to see East Carolina open as a two-point favourite against an SEC team. That number flipped in a hurry, and for good reason since it didn’t make much sense to start with. ECU was 3-6 last season, and while South Carolina is not in the upper echelon of SEC teams, they still do have a big talent advantage here. They also have one of the most interesting stories in college football in quarterback Zeb Noland. Noland previously started games for both Iowa State and the University of North Dakota and came over to the Gamecocks as a graduate assistant coach. With an injury to projected starter Luke Doty, head coach Shane Beamer noticed Noland had eligibility left and named him the Week 1 starter. Noland went on to throw four touchdowns last week in a 46-0 win over Eastern Illinois. This week, the Gamecocks get starting running back Kevin Harris back in the lineup, albeit potentially in a limited role as he’s working his way back from the injury. Still, I think South Carolina wins and covers here.

Rutgers had been an absolute dumpster fire since head coach Greg Schiano left in 2011, so they did the only logical thing they could do: hire Schiano back. While they went 3-6 last season, they were much more competitive than in years past, especially in Big 10 play. They have a dual-threat quarterback in Noah Vedral, who can make some plays and looked dominant last week over a bad Temple team. On the other hand, Syracuse returns Tommy Devito at quarterback, who is still a bit of an unknown. Devito threw for just 92 yards last week against the Ohio Bobcats, but I can’t see him leading the Orange to an upset win this week. With two teams headed in opposite directions, I’ll take the Scarlet Knights in this one.

Florida Atlantic landed some key transfers in the portal this off-season in former Miami quarterback N’Kosi Perry and former USF running back Johnny Ford. While these two players may not have had a major impact against an opponent like Florida last week, they will play a key role when the competition comes down a bit as both have plenty of experience in a bigger conference. Head coach Willie Taggart struggled mightily at Florida State, but he has had success everywhere he has coached at the Group of Five level. On the other hand, Georgia Southern just pulled out a win against 1-AA Gardner-Webb last week and gave up 365 yards passing. This matchup should suit Perry’s strengths. I like the Owls in this spot.

The Cyclones have been an upstart program for a few years now and Matt Campbell has been one of the hottest coaching names out there. However, they do seem to be very slow starters. Last year, Iowa State lost a Week 1 game to Louisiana. Last week, they struggled to move the ball against Northern Iowa in a 16-10 win. They have also given three-year starter Brock Purdy the nickname “Brocktober” as the month of October is when his play really elevates. The Hawkeyes dominated a ranked Indiana team last week, with running back Tyler Goodson leading the way with 99 rushing yards and a touchdown. Iowa is always really tough defensively and has a real chance at playing in the Big Ten Final. They need to limit star running back Breece Hall the way that Northern Iowa was able to last week. If they do that, I like them getting the points here in this “Cy-hawk” trophy battle.