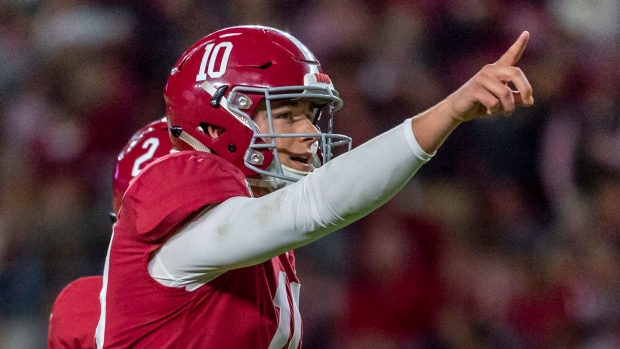 This is the biggest week of this young season so far as the SEC returns to college football. In this weird year that is 2020, the SEC is sticking to a strictly in-conference schedule, which makes for some amazing games week to week.

The highlight of the week is our first look at the LSU Tigers in the post-Joe Burrow era as well as the No. 2 team in the country - the Alabama Crimson Tide.

Here are my picks for this weekend.

If you watched the Netflix series QB1, you may remember a polarizing kid by the name of Spencer Rattler. Well. Rattler is in the real spotlight now and burst onto the scene in his first start for Oklahoma throwing for five touchdowns. He’s a potential Heisman Trophy candidate this season in the mould of former Oklahoma quarterbacks Baker Mayfield and Kyler Murray. Expect Sooners coach Lincoln Riley to keep the offensive machine going in this game. Oklahoma should score close to 50 themselves, so if Kansas State can get a few scores, the over here is looking really nice.

The Lane Train is making its way to Oxford as Lane Kiffin returns to the SEC for his first game as the head coach at Mississippi. However, that train might come to an early halt this week as the Rebels have to deal with the fifth-ranked team in the country - the Gators. Florida gave up 15.5 points per game last season and returns breakout quarterback Kyle Trask. Due to COVID-19 protocol conditions and the lack of normal practice, there have been a lot of sloppy starts offensively and this game could play out the same way. Take everyone’s least favourite play again here with the under.

Most teams would be in trouble after losing first round picks at both quarterback and wide receiver to the NFL. Alabama isn’t like most teams. While junior Mac Jones has the tall task of replacing Tua Tagovailoa, he has a lot of help around him. Jaylen Waddle may be the best and most exciting receiver in the country this season. Like always, Alabama has some dogs on defence led by the return of an injured Dylan Moses. I would take the over in this game, but there’s a chance Mizzou might not score enough. Do not overthink this one, because Alabama coach Nick Saban will have his boys ready to play.

There has been a pattern this year of teams starting off slow offensively (Miami, Navy, SMU), then bouncing back in their next game. I think Oklahoma State fits that mould. While the health of quarterback Spencer Sanders is a question mark, four-star freshman Shane Illingsworth gave them a spark offensively last week when the Cowboys turned to him. OSU’s defence also impressed last week, led by Calgary linebacker Amen Ogbongbemiga. Obviously, I would prefer Sanders in there, but don’t expect fellow Canadian Chuba Hubbard to be contained two weeks in a row. Eighty per cent of the money is on WVU as well. I like to FADE Danny Public!

This seems like a classic letdown spot for the Hurricanes coming off a big national television win and facing their biggest rival in Florida State. However, this is not Bobby Bowden’s Florida State. I’m a fan of the new FSU coach Mike Norvell, but unfortunately he will not be making the trip due to contracting COVID-19. The Miami offence looked electric last week and had a revelation in the kicking game in Jose Borregales. I don’t think the FSU offence can keep up with the Canes here, so once again it will be all about ‘The U’ on Saturday night.

Tennessee is coming of a quietly good season after winning their last six games to finish 8-5 in Jeremy Pruitt’s second year on the job. Jarrett Guarantano returns at quarterback while Brampton’s Josh Palmer has a chance to make a leap at receiver for the Volunteers. Tennessee’s defence is led by star sophmore Henry T’oo T’oo, who led the team in tackling as a freshman. South Carolina, on the other hand, lost a lot of talent to the NFL. This is my favourite pick of the week.

Best Of The Rest

This is bounce-back spot for Iowa State after an upset loss to Louisiana Lafayette two weeks ago. In that game, Iowa State gave up two return touchdowns so the score is a little deceiving. On the other side, TCU lost its top offensive weapon in Jalen Reagor to the NFL, and is coming off a 5-7 season with some questions at the quarterback position.

SMU’s offence looked electric last week. Running back Ulysses Bentley broke out with 227 yards and three touchdowns, while Shane Buechele looked like a star. Southern Methodist might cover this total by itself, but one or two scores from Stephen F Austin will make this a winner.