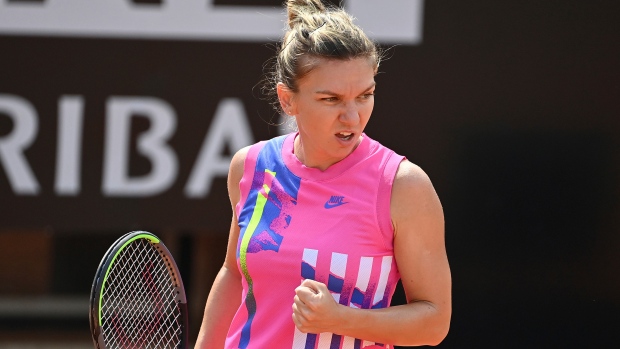 MIAMI — For tennis up-and-comers like Stefanos Tsitsipas, the draw at the Miami Open began to look a lot less daunting even before the tournament began.

Rafael Nadal and Roger Federer withdrew because of injuries, and Novak Djokovic decided against making the trip from his native Serbia. They stayed home with their 58 Grand Slam trophies.

The No. 2-seeded Tsitsipas is among those with the best chance to take advantage, and he looked the part against Damir Dzumhur, winning 6-1, 6-4.

Ranked a career-high No. 5, Tsitsipas improved to 15-4 this year — and 2-3 lifetime against Dzumhur. The 22-year-old Greek used his serve to dominate Dzumhur, who never had a break point.

“I created a lot of opportunities with my serve — I wasn’t rushing at all, finding the right angles and executing it perfectly,” Tsitsipas said. “Even with my second serve I felt like I did a lot of damage, not giving him a chance to press first and apply pressure with his shots.”

Two other title contenders, No. 4 Andrey Rublev and No. 6 Denis Shapovalov, advanced in night matches.

Rublev failed to convert three match points in the final game and then had to sit for a one-hour rain delay before closing out his victory over Tennys Sandgren, 6-1, 6-2. Shapovalov also endured a rain interruption in the third set before finishing off Ilya Ivashka 6-7 (5), 6-4, 6-4.

Shapovalov said it was a "super tough" match, especially coming off a bye.

"There's a lot of moments, even in a comeback, where the match can turn again. But I was really happy to kind of stay on the accelerator," said the 21-year-old native of Richmond Hill, Ont. "I felt like I was leading the second and third set and I felt like I had a lot of chances so I’m really happy I was able to eventually convert on those and get the win today."

He'll now face Poland's Hubert Hurkacz in the round of 32. The pair met at the Dubai Championships last week, where Shapovalov bested Hurkacz 6-4, 6-3 to advance to the quarterfinals. He was later knocked out of the semifinals by South Africa's Lloyd Harris.

"Hopefully I can use that confidence and use those moments from last week and try to transition it to this week," he said. "Of course, it’s different conditions, different surface, so it’s going to be a new match and definitely a tough battle ahead of me."

In women's play, top-ranked Ash Barty and three-time champion Victoria Azarenka advanced to a round of 16 showdown.

Barty beat Jelena Ostapenko 6-3, 6-2 and had a much easier time than in the previous round, when she saved a match point to beat qualifier Kristina Kucova. That was Barty's first match away from her native Australian since February 2020.

She kept Ostapenko on the move and on the defensive, pulling in the former French Open champion and moving her from side to side.

Barty is the defending champion as the 2019 winner. The tournament was cancelled last year at the start of the coronavirus pandemic.

No. 3-seeded Simona Halep withdrew before her third-round match because of a right shoulder injury.

Wild card Ana Konjuh upset No. 15 Iga Swiatek. Konjuh’s career has been slowed by four elbow surgeries, and this week she has earned her first three wins in main-draw WTA play since 2018.

“It has been frustrating the past couple of years, just having been through all these surgeries and comebacks and just never getting it right,” Konjuh said. “So just to be back, you know, healthy and to compete at this level, it means a lot.”