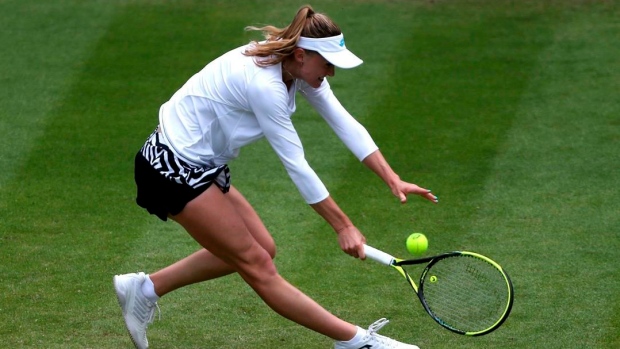 BIRMINGHAM, England — The first meeting of identical twins in WTA Tour history ended with an upset as Kristyna Pliskova overcame a ranking gap of more than 100 places to beat Karolina at the grass-court Birmingham Classic on Wednesday.

It was their first match against each other in the main draw of a WTA event, and the 10th meeting of sisters on the tour.

Kristyna won their first-ever meeting, at the Malta ITF junior tournament as 14 year olds, and has edged ahead 6-5 in their head-to-head record in competitive matches.

The match was decided by a third-set tiebreaker in which both of the 27-year-old sisters made untimely double faults.

Karolina fell behind 6-5 with a double fault, but Kristyna replied with one of her own to make it. At 7-7, Karolina once again double faulted to give Kristyna another match point and this time the left-handed player didn't waste it to wrap up the match in just under two hours.

Barty said she does not feel any extra pressure with her new status.

"For me, nothing changes," the Australian said. "It was an incredible fortnight of tennis that we had without a doubt and some of the best memories of my career will come from those two weeks. But I'm still the same person. I'm still the same Ash Barty and I try and prepare the same way.

"I feel like, if anything, it's taken the pressure off. I can just go out and enjoy it."

Barty could face Venus Williams in the quarterfinals, after the American marked her debut at the tournament with a 6-3, 6-4 win over Aliaksandra Sasnovich.

It is only the second time in 20 years that Williams has played a Wimbledon warm-up event.