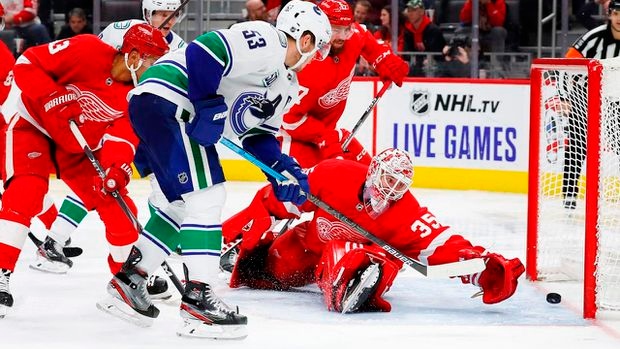 1) Five goals in a period doesn't happen often. The Canucks managed the feat once last season in the second period of an 8-5 win in Boston. Per NHL Public Relations, five goals in the third period of a game has only happened six times in franchise history and the last time was April 15, 1993 -- two years before Bo Horvat was born. So the Canucks 5-2 victory with five answered goals in the third was a generational occurrence. And twice on this road trip, the Canucks trailed by a pair at some point in the second period and found a way to win after rallying from a 3-1 deficit to earn a 4-3 shootout victory in St. Louis at the outset of this four game road junket. With the win, the Canucks took three of four games on their first extended road trip of the season. It's just one game, yet the difference between going 2-2 and coming home 3-1 feels significantly greater. The Canucks knew they had secured at least a .500 road trip with wins in two of the first three. But falling to the struggling Red Wings at the tail end of the trip likely would have been a massive disappointment. While it didn't look good for 40 minutes, the Canucks got fired up for the final frame, figured out a way to beat Jimmy Howard and ended up winning in a runaway. And suddenly this team has won six of seven putting valuable standings points in their back pocket in the process.

2) What a road trip for the captain. Bo Horvat entered the game in St. Louis -- the team's sixth game of the season -- without a goal. He comes home from the road trip as the team's leading goal scorer. Horvat scored in all three victories. He bagged his first against the Blues, added his second against the Blueshirts on Sunday and with family and friends making the trip across the border to see him, Horvat recorded his first NHL hattrick including scoring the first two Canuck goals to spark the comeback. Horvat who has scored 20, 22 and a career-best 27 last season now has five goals in nine games which is certainly a pace that will set him up to raise his personal bar again this season. The Canucks are 3-0 when Horvat scores and are 6-1 since he's had the C stitched to his jersey. He finished Tuesday with seven shots on goal giving him 14 shots in his past two games. And, interestingly, he doesn't have a missed shot attempt over the past two outings. Every shot he has put toward the net has been on goal -- and four of them have found their way in.

3) It's also worth noting that the Canucks went 3-1 on a road trip that took them across the continent and Elias Pettersson did not score -- and still hasn't scored on the road this season. And that's not to suggest Pettersson isn't contributing. He had two assists on Tuesday and now has a share of the team lead with 10 points through nine games (tied with JT Miller). Pettersson made a remarkable diving defensive play with six-minutes remaining and the Canucks clinging to a 3-2 lead. So he was effective at both ends of the ice. It's interesting to note that just a game after watching the final eight minutes from the bench on Sunday at Madison Square, Pettersson was out on the ice late in this one in Detroit and making his presence felt. Moments after the defensive effort at one end, he picked up his second helper of the night on Tim Schaller's first goal of the season. Last season, if Pettersson wasn't scoring it seemed no one was on many nights. It's a sign of team progress that the Canucks aren't relying on the second-year Swede to be their scoring saviour. He's certainly an offensive leader, but others stepped up on the road trip and the Canucks are proving they can win hockey games without Pettersson taking over.

4) It's felt like a matter of time before the Canucks fourth line found a way to contribute offensively. Last week against the Red Wings, the line of Jay Beagle, Tim Schaller and Tyler Motte spent almost every one of their shifts at even strength in the Detroit zone. That trio wasn't as dominant on Tuesday at Little Caesars Arena, but Schaller had a strong night in terms of shot shares (64.2%) and Beagle kept his head above water, too (53.3%) -- and that was primarily against the only scoring line the Red Wings have. On Saturday in New Jersey, the Canucks fourth line had a goal disallowed on a quick whistle. On Sunday, Jay Beagle scored his first goal of the season (short-handed) and Tuesday Schaller broke into the goal column for the first time. Good teams need their best players to produce, but also need contributions from throughout the line-up. Earlier in the season, the defensemen were getting in on the scoring act. That offense -- not surprisingly -- has slowed, but the Canucks replaced it with goals from Beagle, Schaller, Jake Virtanen and Micheal Ferland on the road trip. While Schaller-Beagle-Motte are referred to as the Canucks fourth line based on their spot on the depth chart, they certainly weren't three lines better than they were on the road trip.

5) Jacob Markstrom is dialled in. He was terrific on Sunday in his return to the line-up and seemed to take his game up a notch or two on Tuesday against the Red Wings. The two goals he allowed were both on Detroit power plays -- a 5-on-3 in the first period and a 4-on-3 midway through the second. From that point on Markstrom was spectacular keeping the Canucks within striking distance with a number of spectacular saves including robbing Anthony Mantha twice after Mantha had opened the scoring in the hockey game. Markstrom was in the line of fire on a Wings power play to close out the second period. A goal there and the Canucks likely don't come back. Early in the third Tyler Bertuzzi had two whacks at a loose puck in front of the Canucks net, but Markstrom was there to close the door. Trevor Daley had a great back-door chance set up by Dylan Larkin when the game was tied 2-2. Again, Markstrom was there for his hockey club. After starting the season 0-2 in Alberta, Markstrom has rattled off four straight victories holding his opponents (LAK, PHI, NYR & DET) to two goals in each of the wins.

6) FInally, not to be *that* guy, but it should be pointed out that the Canucks have done a nice job taking advantage of a manageable early season schedule. Only two of their nine games so far (at Calgary and at St. Louis) have come against teams that made the playoffs last season -- including two against the Wings who have now lost five straight and have scored just seven times in that span. Look, the Canucks can only play the teams laid out for them, so they have nothing to apologize for when it comes to quality of opponent. You play the team you're scheduled to play and the Canucks have won six of their first nine games with six of them on the road. That is admirable to say the least. The point is that there are better teams in the National Hockey League and the Canucks will have to face them, too, starting on Friday when the host Alex Ovechkin and the Washington Capitals. But all wins are good wins and all points matter for a team trying to claw its way into a playoff spot after being on the outside looking in the last four seasons. The hope has to be that early season success breeds confidence so that when this team comes up against better opponents there will be a new-found belief that this year can -- and will -- be difference. In that regard, they're off to a very nice start.