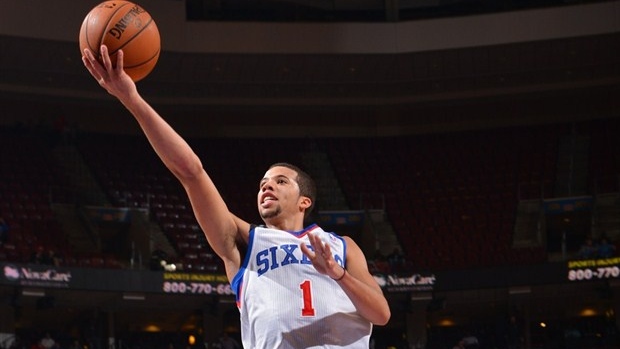 Philadelphia, PA - 2013-14 NBA Rookie of the Year Michael Carter-Williams had the third-year option on his rookie contract picked up by the Philadelphia 76ers, who also exercised their option on fellow 2013 first- round pick Nerlens Noel.

The Sixers had until Friday to make the expected moves. The team also announced it guaranteed the fourth year on the contract of guard Tony Wroten.

Carter-Williams become the second player in franchise history to earn Rookie of the Year honors after averaging 16.7 points, 6.3 assists and 6.2 rebounds while starting 70 games in 2013-14. The 23-year-old point guard also joined Hall of Famers Oscar Robertson and Magic Johnson as the lone rookies in league history to average 16 points, six rebounds and six assists.

Noel made his long-awaited NBA debut Wednesday in Indiana and recorded 10 rebounds, three blocks and six points. The 6-foot-11 forward missed his entire rookie campaign while recovering from an ACL tear he suffered while playing for the University of Kentucky.

Wroten, a first-round pick of Memphis in 2012 who was traded to Philadelphia prior to last season, averaged 13 points, 3.2 rebounds and 3.0 assists over 72 games in 2013-14. He started in place of an injured Carter-Williams in Wednesday's season opener and tallied 22 points, eight rebounds and seven assists.