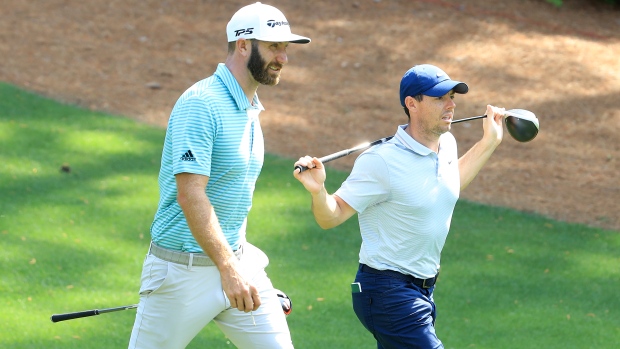 In another time, it might have been labelled just one of those hokey made-for-television golf events. Two pros taking on two more pros to raise money for charity.

But the TaylorMade Driving Relief event on Sunday (TSN 3, 5 at 2 p.m. ET) is much bigger than that in so many ways.

There will be a lot at stake when Dustin Johnson and Rory McIlroy tee off against Rickie Fowler and Mathew Wolff.

First and foremost, they will raise money for COVID-19 relief efforts. So far, more than $4 million has been pledged by corporate donations, with more expected from individual viewers.

It will also mark the return of live golf. Even if there will be more laughs and giggles than drama and tension, it’s better than another re-run of an old championship.

The bigger play here, however, is a test run of the new protocols that the PGA Tour plans to put in place when play returns on June 11 at the Charles Schwab Challenge in Fort Worth, Texas.

It may only be four players rather than the 144 that will play at Colonial Country Club, but it will give a sense of how golf will be played and how it will look.

The tournament director for Sunday’s match, Ryan Hart, a Winnipeg native who now lives in Florida and works for the PGA Tour, said that his team is using the event to learn what lies ahead.

“We’re working through the new norm,” he said. “We’re learning what we need to do to keep people safe. We’re trying to keep this event as similar as what we’ll see at Colonial in a few weeks’ time.”

Hart said the tour has been lucky to have contacts with those in the medical world and at the Center for Disease Control to establish the protocols.

“We believe we have the best setup we can deliver with the info that we have,” he said.

Organizers have gone to great lengths to minimize the number of bodies that will be on the course. In addition to the four players, who will walk and carry their own bags, there will be two rules officials, broadcasters Jerry Foltz and Steve Sands, and a spotter to provide yardages for the broadcasters.

The coverage will use six hand-held cameras; there will be no shots from scaffold towers as is usual at most tournaments.

Everyone who will be on the course has been tested and will undergo another screening when they arrive at Seminole Golf Club, the host site. Physical distancing will be required by everyone, flagsticks will remain in the hole at all times and bunker rakes will be removed. The golfers have been told no handshakes, high-fives or fist-bumps.

Organizers have also received exemptions from officials in Palm Beach County, such as allowing the players to arrive earlier than the 20-minute limit in place for recreational golfers.

“I'm excited to get back to play,” said Fowler. “It's been the longest break I've ever had, the most time I've been able to spend at home.”

“I think the world needs something to watch,” added Johnson, “so I think hopefully we can go out and put on a good show, and it’s for a great cause.”

As a one-off event, the Driving Relief skins game doesn’t have a lot at stake. That’s not the case for the PGA Tour. Its return will be viewed more intently and by a variety of stakeholders and watchdogs.

“I think we have a big responsibility on ourselves to make sure that we practice all the guidelines that the PGA tour is going to set in place,” said Johnson in a Wednesday teleconference. “Obviously, everyone is going to be watching what we're doing, so I think it's very important for us to do it all correctly. We have a responsibility to ourselves and all the other players to stay safe and stay healthy.”

“We'll kind of have to take it as it goes and learn, because it is all very different,” added Fowler. “I know they're talking being able to sterilize rakes and flagsticks after each group goes through, so there's a few things that we'll have to adjust to. But I think the tour has done a great job of setting up the guidelines and a kind of a base to where we're getting back to Colonial at the right time and as safe as possible.”

The PGA Tour is pushing to become one of the first sports leagues to return. The nature of the sport being played outside over a wide area makes it more suitable for physical distancing than most. But it’s still not without risk.

It’s attempting to keep everyone connected with the tournament – players, caddies, officials, media and volunteers – inside a bubble. Everyone will be tested before leaving for the tournament and again when they arrive. They will be asked to stay in one hotel and not venture out except to golf. No families will be permitted to attend. There will be a charter plane the golfers can utilize, but they must clear another test before they board.

While the golfers are anxious to get back to playing, not all of them are so sure there will be 100 per cent co-operation with the protocols.

“What happens when players are eating out and staying wherever they want?” said one who asked not to be identified. “Most will do their part, but there are some who really don’t care.”

Another suggested the tour is trying to control too many things and wondered how it will enforce many of the new regulations. As with most things these days, there are more questions than answers.

Still, it’s expected that most of the top players will show up when the tour resumes play. What they see when they get there is certain to be unusual.

“I think everything is going to be weird,” predicted Johnson, “just because it's going to be so different for us from what we're used to.”