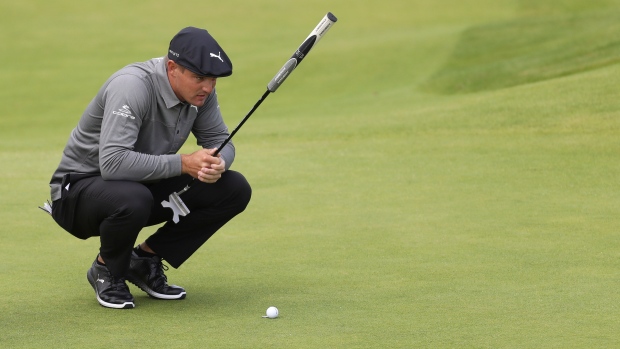 Just about everyone, from players to fans to officials, agrees that the PGA Tour has a problem with slow play. But trying to find a consensus on how to handle it is as difficult as a 10-foot downhill breaking putt.

Once again, the issue of the turtle-like pace on Tour was front and centre over the weekend, stealing the spotlight away from the first of three FedEx Cup playoff events and its eventual winner, Patrick Reed.

The question is: Will this finally serve as the tipping point that compels the PGA Tour to enforce its own already-in-place rules to speed things up?

The whipping boy this time around was Bryson DeChambeau, who took more than two minutes to hit an eight-foot putt and then the same amount of time for a 70-yard pitch. Videos of the two shots went viral, with many PGA Tour members volleying shots about them and the speed of play in general.

Eddie Pepperell called DeChambeau a “single-minded twit” in a Twitter post, (but later apologized). Ricky Barnes stated that DeChambeau needed to watch the videos of and ask himself if it was okay to play this slowly.

Brooks Koepka, one of the most vocal critics of the slowpokes, took matters a step further and chatted face-to-face with DeChambeau on the putting green on Sunday. Reports state that it was a civil conversation.

DeChambeau, who defended himself after his round on Saturday, is just the latest player to serve as the poster boy for golf’s glacial pace. Previous titleholders have included the likes of Ben Crane and J.B. Holmes. But there is a deep list of players who don’t keep up and every golfer knows who they are.

It’s not the first time slow play has become the No. 1 issue on the PGA Tour and, as with past occasions, this latest incident is unlikely to bring any dramatic changes any time soon.

The last time an individual player was given a shot penalty for slow play on the PGA Tour was to Glen Day at the 1995 Honda Classic. At the 2017 Zurich Classic, the team of Miguel Angel Carballo and Brian Campbell was assessed a stroke penalty for being slow. And Tianlang Guan, a 14-year-old from China, was handed a shot penalty at the 2013 Masters.

There are plenty of remedies to slow play. The European Tour has an event with a shot clock that displays each golfer’s time allotted. If the clock hits zero before they swing, they receive a one-shot penalty. The first year of the event saw significantly brisker rounds, in one case dropping the pace of play by 30 minutes, and only four golfers were docked when time ran out.

Golf Canada takes a different approach, utilizing a group pace of play for its amateur championships. It sets up timing gates throughout the course and groups must reach each of these gates within a certain time. If they fail to do so, all members of the group are docked.

Over the years, this has seen some harsh penalties handed out with incidents quite possibly costing players championships.

The PGA Tour has rules in place, of course, but they aren’t enforced. The only form of punishment usually takes place in the locker room where slow players are often called out by their faster peers. Other than making them aware of their pace, it doesn’t seem to change things. The dawdlers continue to dawdle because there is no real reason to speed up, and everyone else suffers.

This week, with its feet being held to the fire, the Tour said it’s looking into the issue and reviewing its current policies. It’s also seeing if its ShotLink technology can play a role in faster play.

It really shouldn’t be a difficult issue. Penalize the offenders as they do in just about every other sport. Until there are some genuine penalties that cost golfers strokes, the problem will only continue.