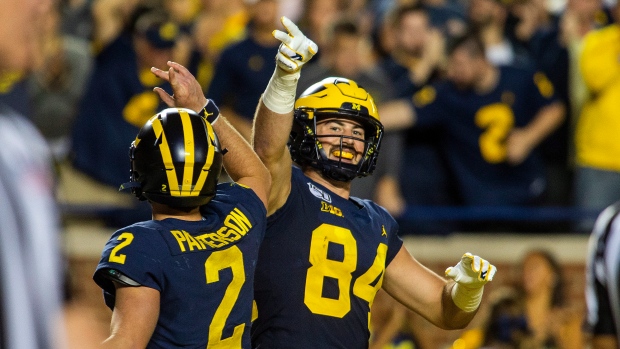 The Wolverines unveiled their new-look offense and showed they have a lot of work to do with the ball. Patterson lost a fumble on the first play of the game and the senior quarterback had one of the team’s two fumbles in the second half.

“Obviously, didn’t get off to a good start,” Patterson said. “I’ve got to take care of the football.”

Asher O’Hara ran for an 18-yard TD after Patterson’s early fumble to give the Blue Raiders a 7-0 lead. O’Hara threw a 2-yard pass for a score to Jarrin Pierce after Lavert Hill fumbled on a punt return to pull them within 10 points late in the first half.

Michigan made it 40-14 with Dylan McCaffrey’s 6-yard run late in the third quarter and Ben Van Sumeren’s 1-yard run with 6:37 left.

Patterson was 17 of 29 for 203 yards with TD passes to Tarik Black, Nico Collins and Sean McKeon. McCaffrey completed both of his passes for 17 yards and ran for 42 yards along with a score. Standout receiver Donovan Peoples-Jones was not in uniform for the Wolverines, sitting out with an apparent injury.

Michigan’s Zach Charbonnet ran for 90 yards on eight carries in his college debut.

“The stage didn’t really affect me at all,” he said.

Middle Tennessee: The Blue Raiders should feel good about being competitive in a game they were expected to lose by about five touchdowns.

“We shot ourselves in the foot at times with pre-snap penalties and mishandling the ball,” coach Jim Harbaugh said.

Michigan may not move much, up or down, after winning a game by a lopsided margin against an overmatched opponent.