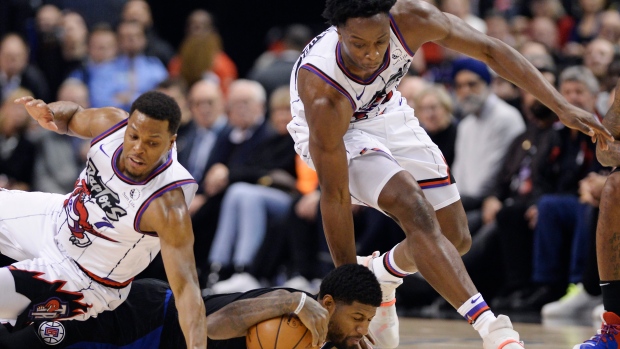 TORONTO – At this point of the season, just over a quarter of the way in, most teams are still trying to find their identity.

It takes time. In some cases it can take a lot of time, even for the league’s best clubs. Last year’s NBA champions, the Toronto Raptors, would tell you they didn’t quite figure things out until mid-April, during the first round of the playoffs.

That’s the advantage the Raptors had coming into this season, fresh off a two-month title run: they knew exactly who they wanted to be and how they needed to play.

They prided themselves on their effort and energy, particularly on the defensive end of the court – that’s a big reason why they won the championship and it’s how they planned to stay relevant, even without Kawhi Leonard.

Unlike last year’s team, which knew it had the most talented player on the court to bail them out on off-nights, these Raptors would have to win games with hard play and stifling defence. There would be less room for error.

Toronto started the new campaign 15-4 – matching last year’s record through 19 games – thanks in large part to that established identity. That they also happened to be among the league’s most accurate three-point shooting teams certainly didn’t hurt.

Admittedly, the Raptors have lost their way since then. They’ve dropped as many games over their last five contests as they did during their first 19, going 1-4. The skid isn’t entirely unexpected or without explanation.

The shooting has regressed, which was bound to happen, though not to such a drastic extent. Over the last five games the Raptors shot 27 per cent from three-point range, down from 40 per cent (ranked second in the NBA) through their first 19 contests.

Notably, the Raptors have also faced a much tougher schedule – all four of their losses during this recent stretch have come against top-8 teams (Miami, Houston, Philadelphia and the Clippers).

All of those things could have been anticipated, at least to some degree. The bigger concern is the noticeable and uncharacteristic drop off in energy level over the last couple of weeks. It’s not lost on the guys inside of the Raptors locker room. They know they haven’t looked like themselves.

“I just don't think our energy overall has been good as a team,” Pascal Siakam said after Wednesday’s 112-92 loss to the Clippers – their most lopsided defeat of the season. “We've got to find a way because that's how we play at our best, when we have energy and we're flying around. That's Toronto basketball and we've got to play that way.”

“When you’re thinking about who you are and what your identity [is] as a team, I think one thing we’ve always tried to be is a super-hard playing team,” head coach Nick Nurse said following Friday afternoon’s practice. “We usually come with an attitude of we’re gonna really guard you, get up the floor, play with some pace, those kinds of things. I think we did that [Wednesday] night. I think we were flying all over the place. And after reviewing the tape, we had five or six straight wide open uncontested threes, and none of them go [in], mix in a few turnovers, and I think we let it get to us. That zapped our energy a little bit. I don’t know what to say to that other than try not to let that happen, but it’s hard not to let that happen. We need to make sure we execute a little better. And we’ve got to step in and make some shots. It keeps that energy flowing, which we need. And again, that’s who we are.”

Ideally, you don’t want to let shot making – or a lack thereof – affect the other areas of your game, individually or as a team. Even if you’re not shooting the ball well, you should still be defending and playing hard. Players know that but, to Nurse’s point, it’s easier said than done.

It’s human nature. When a player is missing shots he generally makes, it can be tough to stop that frustration from boiling over. Conversely, when you’re shooting well and feeling good about yourself, you get that pep in your step – something the Raptors haven’t played with consistently since taking a franchise record 40-point lead into halftime against Utah earlier this month.

“Mentally, for someone who works so hard and comes in here every day to spend a lot of time to work on his shots, mentally it's kind of hard,” said Ibaka, who was held scoreless and missed all eight of his shots in Wednesday’s loss. “It's kind of tough.”

“For me, specifically, I do a lot of different things so I let those things rally me and bring me back up,” said Rondae Hollis-Jefferson, who has carved out a niche as an energy player off the bench for Toronto. “But for other players, it may be a different case of, like, ‘all right, if I'm not hitting shots I'm not this way,’ or whatever the case may be. But we've got to just understand that it's bigger than just the shots you make or whatever. You can contribute in other ways. I feel like we've got a better understanding now.”

Nurse, who considers himself something of a shot doctor, knows there are so many different variables involved in a player’s jumper and whether or not it’s falling – mechanics, release, footwork, repetition, and a little bit of luck. There’s also the mental side of shooting.

“Sometimes it’s clearing your mind or maybe it’s resting and getting away from it for a day, it depends who you are,” said Nurse, who was asked how players can get themselves out of prolonged shooting slumps. “Maybe it’s wearing a certain pair of socks that [you wore] the last game you shot really well. Whatever you need to trigger you back to ‘the next time I vault up, it’s going in’. You always hear me say, it’s hands, feet and between your ears if you want to shoot well. Between the ears is probably the biggest one.”

Most people were surprised to see the Raptors at the top of the league in three-point shooting to open the season, especially after losing Leonard and Danny Green. Maybe they’re not quite that good, but they’re also not as bad as they’ve looked recently. At some point their shooting numbers will level off, Lowry and Ibaka should be fine once they get their conditioning and rhythm back, and the schedule is about to ease up again.

Until then, and regardless of what else is going on, the Raptors have to rediscover their identity. Shooting comes and goes, injuries are unpredictable, and the schedule is what it is, but effort and energy are controllable. They know who they are. Now they have to play like it again.​