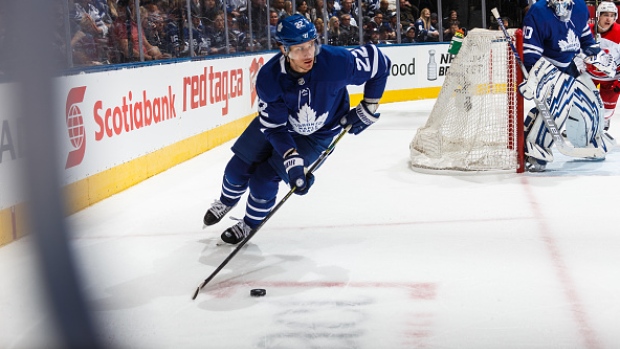 On the surface, it would appear difficult to try and convince someone to switch sides in the Battle of Ontario right now.

The Toronto Maple Leafs are an upper-echelon team on the verge of competing for the Stanley Cup. Conversely, the Ottawa Senators have languished at the bottom of the standings in each of the past two seasons and appear to be careening towards another lottery pick after the 2019-20 season.

Despite that massive gulf between the provincial rivals, new Ottawa head coach D.J. Smith didn’t have a hard time persuading Nikita Zaitsev to waive his no-trade clause a couple of weeks ago in order to facilitate a trade to the Senators from the Maple Leafs.

“I didn’t take very much to be honest. He’s a guy that I know really well,” Smith told reporters Monday morning. “I’m looking for people to change the culture here and up the work ethic. I just explained to him how much I needed him here in Ottawa to help us with that and he was sold right away.”

The Senators held a low-key media session for Zaitsev Monday at Canadian Tire Centre, unveiling his No. 22 jersey and allowing the Russian-born defender to speak with reporters for the first time since the July 1 trade.

Zaitsev says the fact that so many familiar faces are also switching sides in the Battle of Ontario – including Connor Brown, Ron Hainsey and Tyler Ennis – made the decision a lot more palatable.

“Many guys are coming here from Toronto right now and my relationship with D.J. Those were important for me,” Zaitsev explained. “The [Senators] are building, so it’s interesting.”

The admittedly shy Zaitsev declined to elaborate on exactly why he asked Leafs GM Kyle Dubas for a trade out of Toronto this off-season, only saying there were “many reasons” for his decision.

“I just wanted to change a little bit,” he said, without going any further.

As his former assistant coach with the Maple Leafs, Smith is likely privy to more information on Zaitsev’s departure from Toronto. But like his defenceman, he was fairly tight-lipped on the subject on Monday.

“Sometimes things happen that people don’t understand in their own lives that just happen. I think a fresh start for him was needed and I think Ottawa is the perfect spot for him,” Smith said.

The Senators are banking on Zaitsev being a major piece in their rebuilding plan. He’s under contract for five more seasons with an annual cap hit of $4.5 M, making him the only player on the roster locked up beyond the 2021-22 season.

That type of term and contract are certainly going to make Zaitsev a lightning rod for criticism – especially if the Senators defensive struggles continue. The team allowed a league-worst 302 goals last season and was constantly hemmed in their own zone.

“On a team that really needs defensive help, I think he’s really going to help us,” Smith explained. “He’s going to instill tough hockey on the back end here. He’s going to cross check you; he’s going to keep you away from the net. People are going to fall in love with his game sooner rather than later.”

The idea of Senators fans immediately falling in love with Zaitsev might be a bit far-fetched, especially considering the amount of vitriol the fan base had for his predecessor in Cody Ceci.  But Zaitsev will certainly be given a grace period to integrate himself into a rebuilding lineup and Smith is hoping to show off more of his offensive side, which would certainly help sway the fan base in his favour.

In his rookie campaign with the Maple Leafs in 2016-17, Zaitsev saw a considerable amount of time on the power play, recording 11 assists on the man advantage. In the past two seasons, however, Zaitsev saw his power-play time significantly reduced. As a result, he didn’t record a single power-play point in each of the last two campaigns.

With Smith as the head coach, it sounds like right-hand shooting Zaitsev may get back to having a little more time on the power play, as Ottawa’s most skilled defencemen – Thomas Chabot, Christian Wolanin and Erik Brannstrom – all play the left side.

“He’ll have a lot more opportunity here to get some offensive starts and to do some things with the puck,” says Smith. “His role [in Toronto] was a bit more defensive. We’re going to expect that, but he’s learned the league now and I expect he can get a little more offence for sure.”

For his part, Zaitsev says he has not had an extensive conversation with Smith about his role for this upcoming season or who his regular partner might be on the back end.

“We didn’t speak about my role yet, but it’s going to be good for me. I just want to help in any way,” Zaitsev said.

Smith himself hasn’t sorted out his pairings and was hesitant to lock in Zaitsev with any of those aforementioned talented, young defencemen on Ottawa’s left side.

“Is he going to play with Chabot? Everyone is going to get an opportunity to play with everyone at some point,” Smith added. “Certainly, he’s our No. 1 shutdown right-side d starting the year off, but he’ll play in all different pairs.

Zaitsev is planning to fly back to Moscow on Monday, where he’ll continue his off-season training regimen before returning to Ottawa before the start of training camp in September. When he does return, he’ll be an elder statesman on a team full of players and prospects who are five and six years younger than him.

“I still feel like I’m 18,” he said with a laugh. “But we’ll see how it goes. I’ve never been in that kind of situation where I’m one of the oldest guys in the room.

Even though Zaitsev is shy in front of cameras and doesn’t have a full command of the English language, Smith is adamant the blueliner will be one of the most influential forces inside his dressing room.

“Some of the best leaders in the world aren’t the people who are saying things – they’re leading by example every day.”