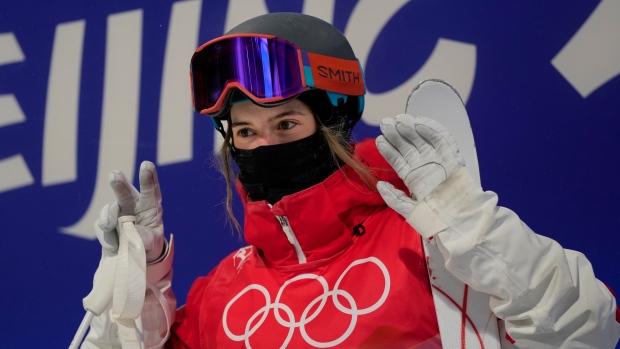 ZHANGJIAKOU, China — Two dramatic crashes within a half-hour of each other derailed Canada's hopes in the women's moguls final at the Beijing Olympics and possibly signalled the end of a freestyle skiing dynasty.

Former Olympic champion Justine Dufour-Lapointe fell hard in the first final on Sunday, losing one of her ski poles and running out of time as she gathered herself before completing her routine down the hill. Olympic rookie Sofiane Gagnon fell in the second final at almost the exact same spot in the course's second segment.

Minutes later, Chloé Dufour-Lapointe, Justine's older sister, was eliminated from the second final as other skiers put up better scores.

"Mon Dieu," said Justine, who took a long pause before explaining her emotional state after the crash.

"I would have liked to just crawl into a mogul and cry there for a while," said the Montreal native. "But I stood up and said, 'You know what? You have only one choice: to ski down that slope and have a smile on at the bottom of the course.'

"There's so many young girls that need to know that you never gave up and you fought to the end."

Dufour-Lapointe's crash actually guaranteed Gagnon a berth in the event's next round, as the younger Canadian skier had already earned a 74.44 in the first final.

Justine said that she wasn't sure what led to the crash, but that the three-time Olympian had been the best version of herself heading into the Games.

"I don't know what happened, but I know that up top, I was serene," she said. "I was at my place, I was happy to be there.

"I was so prepared, like I never had been for the past two Olympic Games, and I was feeling so much stronger than I had ever been."

Justine bent over with her hands on her knees, tears streaming down her face after her "Did Not Finish" became official.

Chloé came over to console her younger sister, repeatedly hugging her and touching the fronts of their helmets together as they quietly spoke to each other as loud pop music continued to play during other skiers' runs.

"I totally felt her heart break," said Chloé. "I just wanted to be there for her and let her know that she must be proud of herself even though sometimes you don't see it right away.

"It was important for me to hug her and live this moment together."

Maxime, the eldest Dufour-Lapointe sister, was also in attendance at Zhangjiakou Genting Snow Park. She competed at the 2014 Sochi Games alongside her younger sisters and is serving as a mentor for Canadian athletes in Beijing.

After Justine and Chloé's embrace, the youngest Dufour-Lapointe sought out Maxime and hugged her too.

"It means the world (that my sisters are here). It feels like a blessing because tonight is not easy. It's really not easy to get through those emotions," said Justine.

As Justine began a series of media interviews, Gagnon started down the course for the event's second final. She landed her first jump, but four or five moguls into the second segment, she hit one at a bad angle and bounced sideways, splashing into the next mogul.

The Dufour-Lapointe sisters have been some of Canada's most high-profile Olympians over the past 12 years.

Beijing was Chloé Dufour-Lapointe’s fourth Olympics, having competed in Vancouver in 2010, Sochi in 2014 and Pyeongchang in 2018. She won moguls silver in Sochi.

After Chloé was eliminated from Sunday's final, finishing ninth overall, the 30-year-old skier said she intended to compete in the final World Cup of the season.

As for returning to the Olympics one more time?

"I think I put a really nice bow on these Olympics," said Chloé.

The 27-year-old Justine won moguls gold in 2014 and then silver in 2018. She said it was too early for her to know if she would compete at the 2026 Milano Cortina Olympics.

"It's really hard to tell, I have so much emotion right now," said Justine.

"But I think it's gonna be another conversation I will have with you guys," she said, gesturing to reporters with a laugh. "Because right now I can't find a straight answer to that."

The 22-year-old Gagnon said that her first Olympics taught her a lot and confirmed that she can perform on sports' biggest stage.

"It definitely motivates me," said the product of Whistler, B.C. "I'm already hungry for more, I already want to start training for 2026. I couldn't be more ready to keep progressing and to keep working."