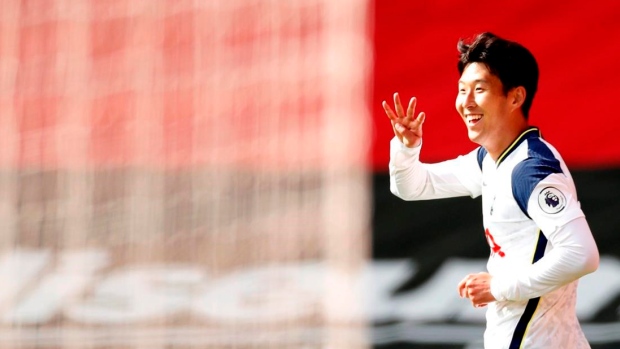 After Kane demonstrated his vision and technique to produce more assists than he managed all of last season, the striker grabbed the fifth for Tottenham, which had to come from behind after Danny Ings' opener for Southampton.

“We have a good relationship on the pitch and off the pitch as well,” said Son, who hadn't even had a Premier League hat trick before.

After opening the league season with a loss to Everton, Tottenham registered its first win a day after Gareth Bale returned to the London club.

Both Kane and Ings had openers ruled out by VAR before the glut of goals finally begun.

Ings latched on to Kyle Walker-Peters’ ball over the top and found the bottom corner of the Tottenham net in the 32nd minute.

Son grabbed his second less than two minutes after the break as he was deftly played in by Kane.

Son completed his first Premier League hat trick in the 64th minute after getting on the end of Kane's lofted pass.

Kane became the first player to set up a Premier League teammate for four goals, crossing for Son to chip goalkeeper Alex McCarthy.

Kane got his name on the scoresheet by meeting the rebound after Erik Lamela hit the post.

There was still time for a slightly frustrating end for Tottenham when Matt Doherty was adjudged to have handled in the box and Ings netted from the penalty spot in the 90th.