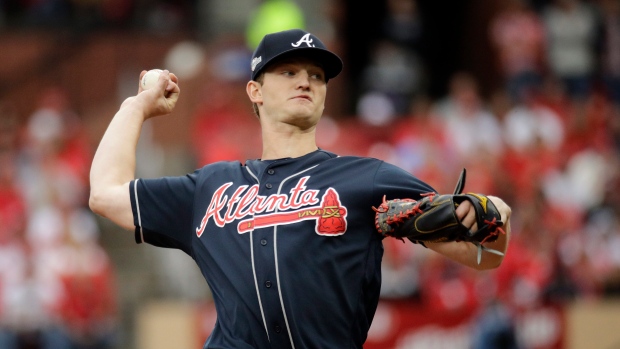 Former Canadian big leaguer Chris Reitsma knew Mike Soroka had the potential to become a top pitching prospect when he first met the Atlanta Braves rookie at a baseball camp in Calgary a decade ago.

Then Soroka joined Canada's junior team as a teenager, and Reitsma saw a whole new level to that potential.

"I remember him being 15 or 16 and pitching against a lineup that had a bunch of professional 21-year-olds in extended spring training, and he went out there and just competed," said Reitsma, who served as Canada's pitching coach during Soroka's time with the team. "His stuff wasn't quite ready in terms of being dominant, but he was able to get outs by just being savvy and knowing how to pitch.

"And he had this little smirk when he came in from the mound, just that realization like 'hey I can do this,' that a-ha moment. That was pretty special to see."

Soroka, a first-round pick by the Braves (28th overall) out of Calgary's Bishop Carroll High School in 2015, is among the three finalists for this season's National League Rookie of the Year award.

Pete Alonso of the New York Mets and Fernando Tatis Jr. of the San Diego Padres are the other finalists. The winner will be announced Monday.

Soroka, an all-star this season, finished his first full year in the majors with a 13-4 record and a 2.68 earned-run average (third best in the NL behind Cy Young candidates Hyun-Jin Ryu and Jacob DeGrom). The 22-year-old also had 142 strikeouts with just 41 walks over 174 2/3 innings.

Soroka made his major league debut with Atlanta in May 2018 — allowing one run and striking out five batters over six innings in a win against the Mets with Reitsma in the stands — but a shoulder injury limited the right-hander to just four more starts that year.

With the injury behind him this season, Soroka's success came quickly. But it didn't surprise Reitsma.

"He's a kid who really believes in himself, so once he has success at a certain level he knows he should be able to repeat that and stay consistent," Reitsma said in a phone interview with The Canadian Press. "When he got called up this year I thought 'well, the sky's the limit, he just has to stay healthy.'

"And obviously it's a special season and he's going to finish up there in the Rookie of the Year ballots. It's hard to prognosticate that level of success because it's such a rare thing, but he's quite a special kid so I've always known he was going to do special things."

Reitsma, also from Calgary, spent seven seasons in the big leagues, mostly as a reliever, including three years with Atlanta from 2004-2006.

Now a cross-checker with the Kansas City Royals, Reitsma stays in touch with Soroka, exchanging frequent text messages during the season and catching up in person when Soroka returned to Calgary after his Braves were eliminated by St. Louis in the NL Division Series.

Soroka started Game 3 of that series against the Cardinals, a 3-1 win that had Reitsma tensing up as he watched from his couch.

"My wife was like 'are you actually nervous?' and I was like 'yeah, I'm really nervous right now,' and she said 'well now you know what we went through all those years,'" Reitsma said with a laugh. "I never got nervous for him during the regular season but in the playoffs I did, not going to lie.

"Then he struck out a couple guys and I was like 'OK, he's going to be all right.'"

Reitsma is hoping Soroka's stellar first season in the big leagues can have a lasting impact on young Canadian athletes, especially in Alberta, where hockey and soccer continue to dominate the sports landscape among children.

He also feels that Soroka, and the level of success he enjoyed this season, has flown a little under the radar with so many other good Canadian sports stories in 2019.

"If people can't get on board with (a Rookie of the Year finalist) then there's a problem," Reitsma said. "It's important that kids around here can see that and say 'hey I can do that too,' that they can at least go out there and try and see what happens.

"I think Canadian media for the most part has maybe been a little late to the party with (Soroka) so I'm glad people are starting to take notice."