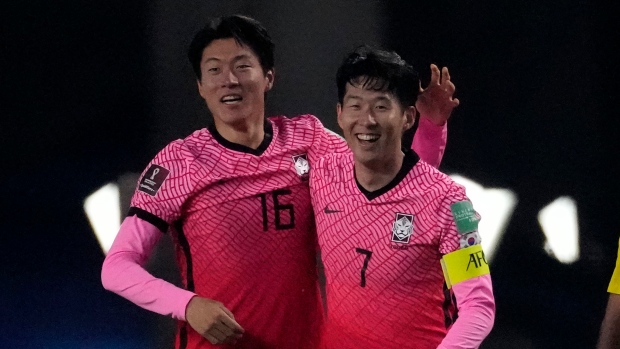 SEOUL (AP) — South Korea resumed its World Cup qualifying campaign after 19 months with a 5-0 win over Turkmenistan on Saturday to move within sight of the third round.

Bordeaux striker Hwang Ui-jo opened the scoring in Goyang after 10 minutes and Nam Tae-hee netted late in the first half to send the hosts on their way to 10 points from four games in Group H.

Kim Young-gwon, Kwon Chang-hoon and a second from Hwang completed the comprehensive victory for South Korea, looking to qualify for a 10th successive World Cup.

Group H is the only one of the eight groups in the second round with four teams instead of five after North Korea withdrew in May, citing concerns over COVID-19.

Only the group winners progress to the third round automatically, along with the four best second-placed teams. The defeat ends Turkmenistan’s chances.

Lebanon is second, level on points with Korea, after a 3-2 win over Sri Lanka, which went ahead early through Ahmed Razeek. Joan Oumari scored twice in the first half along with Mohammed Kdouh to put Lebanon in control and though Razeek ensured a tight finish with his second on the hour, Sri Lanka slipped to a fifth straight defeat.

In Saturday’s other qualifier, Saudi Arabia moved five points clear of Uzbekistan in Group D with a 3-0 win over Yemen in Riyadh.

All the goals came in the first half. Salem Al-Dawsari opened the scoring after four minutes and then two goals from Fahad Al-Muwallad sealed the victory.

There are 13 games on Monday with China playing its first in the United Arab Emirates. The team routed Guam 7-0 on May 30 in front of 40,000 fans in Suzhou but with Group A opponents Maldives and Syria struggling to gain entry into China due to COVID-19 restrictions, the Asian Football Confederation (AFC) switched the group to Sharjah.

If China fails to defeat the Philippines, then finishing first will be impossible with Syria moving eight points clear on Friday after a 4-0 win over Maldives.

Japan, in action against Tajikistan, is the only team already sure of a place in the third round and could be joined by Australia.

After defeating host Kuwait 3-0 on Thursday, Australia will progress with a win over Taiwan if Jordan, currently five points behind in Group B, fails to defeat Nepal.

“I think this team can shock the world and this group, we’ve got talent, the talent just needs to be given an opportunity and in the past it hasn’t,” Australia coach Graham Arnold said.

Iran, in third place in Group C, is three points behind leader Bahrain but has a game in hand. The two meet on Monday.