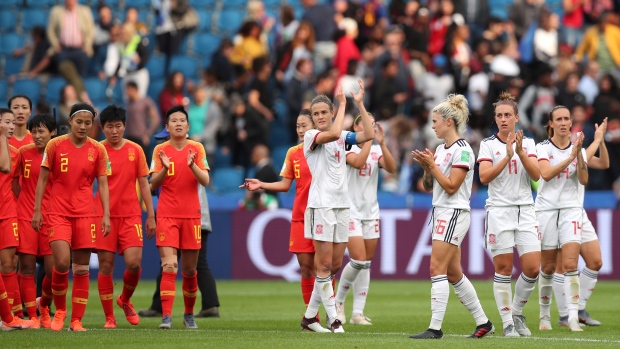 LE HAVRE, France — Spain and China played to a scoreless draw Monday that advanced both squads to the round of 16 at the Women's World Cup.

Spain finished second in Group B behind Germany. La Roja advanced to the knockout stage for the first time and will face the winner of Group F on Monday at Reims — likely the United States if the Americans win or draw in their final group match against Sweden.

Defender Celia Jimenez said it doesn't matter which team Spain will face because they are all good.

"The U.S. has a really powerful team, they play a direct game, they like to be dangerous, but at the same time I think Sweden is as well a really good team," she said. "They also tend to play direct, so they kind of are similar teams. I think Spain is ready, I think we know what we play, our style of play, it's good, and I don't think it matters who we take on next."

China has advanced to the knockout stage at each of its seven World Cup appearances. It finished third in the group at 1-1-1.

Peng got her fingertips on another shot from Hermoso in the 86th minute to deflect the ball over the net as Spain appeared to apply pressure in the waning minutes.

"We have opportunities, We still have hope. That's why I'm so touched about our players' effort and spirit," China coach Jia Xiuquan said through a translator.

Two-time World Cup winner Germany, which defeated both Spain and China, finished atop Group B after a 4-0 victory over South Africa in Montpellier on Monday.