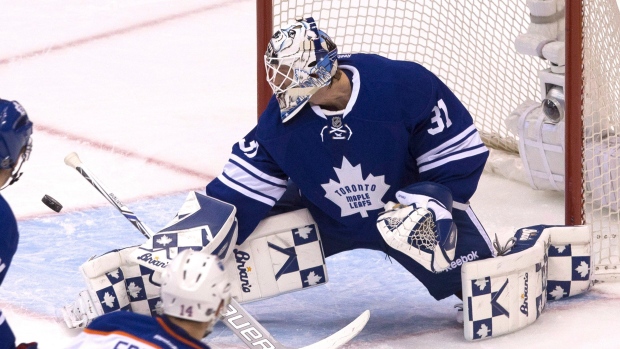 The 22-year-old Sparks stopped 24 shots in his NHL debut to lead Toronto to a 3-0 win over the visiting Edmonton Oilers on Monday.

It was the first time since Dec 23, 2014 that the Leafs shut out their opponent, with Jonathan Bernier blanking the Dallas Stars 4-0 that night. Monday was also the first time any Leaf goaltender earned the shutout in his debut.

"They've been playing hockey here a long time so I think that's pretty cool," said Sparks, who was visibly emotional after being named the game's first star with his parents watching from the crowd.

"Good for the kid," said Leafs coach Mike Babcock. "Life's about opportunity and how you respond to that opportunity, obviously he must have some swagger about him, some confidence. He played well, we got a win."

Sparks, who was summoned from the American Hockey League's Toronto Marlies earlier in the week to replace an injured James Reimer, was given the chance to start over a struggling Bernier, who is 0-8-1 this season.

With Reimer not expected to be ready to play before Toronto's next game on Wednesday against Winnipeg, the Elmhurst, Ill., native will get a chance for his second straight start.

"I assume he's starting in Winnipeg unless (Reimer) is ready to go," said Babcock.

Leo Komarov, with two, and Nazem Kadri supplied the offence for the Maple Leafs (8-11-5), who snapped a three-game skid.

Both teams had only a shot apiece through the first 10 minutes of the game. Edmonton led 8-3 heading into first intermission, but Toronto put on pressure in the second to even the shots 16-16 after two periods.

Komarov opened the scoring on the power play with his team-leading — and career high — ninth goal of the season 6:45 into the first.

After a defensive breakdown by the Edmonton penalty killers, van Riemsdyk found Komarov alone between the face-off circles. He tipped the pass past Nilsson, who was frozen on the play by van Riemsdyk creeping in from the blue line.

Komarov's goal was Toronto's seventh by way of the power play in the past six games.

"I think the more and more we play together the more chemistry we get," said van Riemsdyk, who finished the game with three assists. "Now we're starting to convert on the chances we've been getting."

The Oilers had a strong first shift to open the second period and forced Sparks to make three quick saves, including one in close on Leon Draisaitl.

Justin Schultz managed to get the puck past Sparks but hit the post and Ryan Nugent-Hopkins rang the iron for the second time in the middle frame with just over five to play.

"In my experience with a guy, he's either hitting a home run or maybe not doing very well at the plate, and the young fella had a great game tonight," McLellan said about Sparks' performance.

Draisaitl burned Matt Hunwick one-on-one late in the second off the rush that led to a great scoring chance. The Leafs defenceman was forced into taking a hooking penalty while the puck sat loose in the crease after Sparks made the initial save with his blocker to preserve a 1-0 lead after 40 minutes.

"Going into the third period (a shutout) is definitely on your mind," said Sparks. "You just want to be on and make sure if they're going to beat you they have to really beat you. The guys in front of me kept everything out side, kept it manageable and I have them to thank."

The two clubs traded chances early in the third before Kadri made it 2-0 at 7:33 on a goal that went to review for a high stick.

Jake Gardiner floated the puck at the net from the blue line and Kadri deflected it down past Nilsson for his third of the season.

Taylor Hall had a great chance to put his team on the board late in the third while on the power play but was turned away by Sparks.

"We had some posts, some chances," said Hall. "It's not like they had a ton of chances even-strength, either. Bit of a chess match but at the end of the day they got a couple goals past our goalie and we didn't find a way to make it hard on him."

Komarov added his second goal of the game into an empty net with 1:01 remaining.