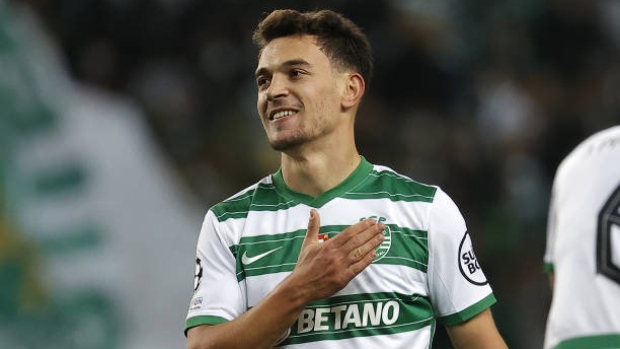 LISBON, Portugal (AP) — Sporting Lisbon scored three times in the last 15 minutes of the first half on its way to a 4-0 win over Besiktas that boosted its hopes of advancing in the Champions League on Wednesday.

Pedro Gonçalves scored twice, and Paulinho and Pablo Sarabia added a goal each, as the Portuguese champions comfortably won their seventh in a row in all competitions and stayed within range of the Group C leaders. Besiktas was eliminated after its fourth straight loss in the tournament.

Sporting reached six points from four matches and was tied with second-place Dortmund, which lost 3-1 to leader Ajax at home. Ajax has 12 points, while Besiktas stayed in last place. Sporting next hosts Dortmund before visiting Ajax.

Sporting had beaten Besiktas 4-1 in Turkey as part of its seven-game winning streak. It has lost only three times in its last 40 matches in all competitions.

Gonçalves put Sporting ahead by converting a 31st-minute penalty kick after he was pushed from behind inside the area, then added to the lead following a breakaway in the 38th. Paulinho, who had hit the post early in the match, scored the third three minutes later and Sarabia sealed the victory for the hosts from close range in the 56th.

Sporting defender Pedro Porro had to be replaced because of an injury only 15 minutes into the match at the José Alvalade Stadium in Lisbon.

This is Sporting’s ninth Champions League group campaign, and first since 2017-18. It advanced from the group stage only once, in 2008-09, when it was eliminated in the round of 16 by Bayern Munich 12-1 on aggregate.

Besiktas also last appeared in the group stage in 2017-18, winning its group before also being eliminated by Bayern in its first last-16 appearance.