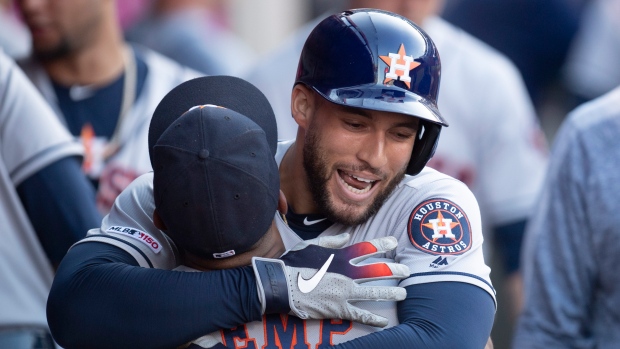 ANAHEIM, Calif. — Alex Bregman and Houston stumbled out of the All-Star break, dropping four of six games, but the Astros have looked more like themselves the past two nights.

"The boys are back. We're ready to go," said Bregman, who hit a solo shot off Matt Harvey to lead off the sixth for his team-leading 25th of the season. "We came out and played our brand of baseball from the get go. When we set the tone like that, it is off to the races."

Springer — who put Harvey's fastball over the wall in right-centre during the third inning — had four home runs during the four-game series, tying Craig Biggio for the most when batting leadoff in a series in franchise history. Biggio's four came during a three-game set against the Cubs in 1998.

Springer has matched his total from last year with 22 homers.

Miley (8-4) yielded only two walks over the first 4 2/3 innings before Brian Goodwin's double to right. The left-hander improved to 4-0 in his career against the Angels, allowing two runs and three hits over 5 1/3 innings.

"It was good early and then I kind of lost it later. I like where I was at with the curveball and changeup," said Miley, who has allowed three runs or fewer in all but two of his 20 starts this season.

The Angels — who went 5-2 on their first homestand following the death of pitcher Tyler Skaggs — didn't get much of a lift from the return of Mike Trout, who missed three games with a strained right calf. Trout was the designated hitter and went 1 for 4.

Harvey's rollercoaster season continued. This was the sixth time in 12 starts the right-hander has surrendered five or more runs. He has allowed two or fewer in his other six.

Harvey's 7.09 ERA is third-highest in the majors among pitchers who have made 12 or more starts.

The Astros scored their first five runs with two outs. Yordan Alvarez's two-run double down the right field line put Houston on the board in the first for the second straight night. They added three in the third on Springer's homer, Yuli Gurriel's RBI double and a run-scoring single by Josh Reddick.

Los Angeles scored both of its runs in the sixth. Justin Upton's sacrifice fly drove in David Fletcher, and Albert Pujols had an RBI single.

Astros manager AJ Hinch tied Larry Dierker for second-most wins in franchise history with 435. Bill Virdon has the record with 544.

"It's something I can reflect on later," said Hinch, who is in his fifth season with Houston. "Larry is one of the all-time greats on a lot of levels with this organization."

A young boy in an Astros jersey ended up with the ball from Bregman's homer, then stunned a man who appeared to be his father by throwing the ball back onto the field.

Astros: IF Aledmys Diaz (left hamstring strain) will have rehab appearances at Double-A Corpus Christi on Friday and Saturday. Hinch said there is a possibility Diaz could be activated on Monday.

Angels: Pujols left in the eighth inning with left hamstring tightness and is considered day-to-day. ... RHP JC Ramirez, who had Tommy John surgery on his right elbow last April, will have one more rehab appearance at Class A Inland Empire. Ramirez said he anticipates being ready by the beginning of August. Ausmus said the plan is to bring back Ramirez as a reliever when he is activated.

Astros: Return home to face Texas in a three-game series. RHP Justin Verlander (11-4, 2.98 ERA), who is third in the AL in ERA and fourth in strikeouts (160), gets the call Friday.

Angels: Hit the road for a weekend series against Seattle. Friday's starter has not been determined.