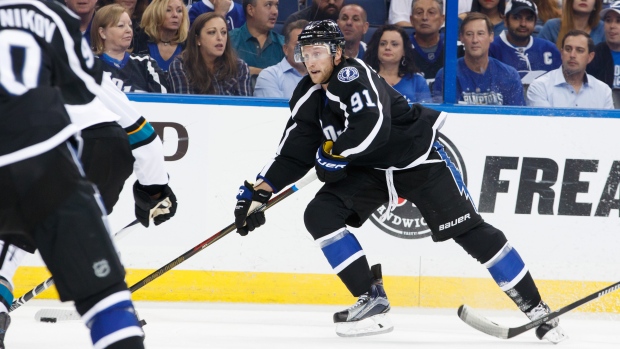 TSN Hockey Insider Bob McKenzie reported earlier Thursday that this type of injury has a "best-case recovery timeline" of four months and could last up to six months.

While TB lists Stamkos as out indefinitely, it's believed best-case recovery timeline for this procedure is four months, possibly longer.

Stamkos's procedure, which can have 4 to 6 month rehab, will be performed by knee specialist Dr. Robert LaPrade. Precise recovery time TBD.

The Lightning announced Wednesday that Stamkos is out indefinitely with a lateral meniscus tear in his right knee.

Stamkos was injured in a collision along the boards in the first period of the team's 4-3 win over the Detroit Red Wings Tuesday.

Through 17 games this season, Stamkos has nine goals and 11 assists.

Last April, Stamkos had surgery to remove a blood clot near his right collarbone, causing him to miss all but Game 7 of the Eastern Conference Final against the Pitsburgh Penguins.

In November of 2013, Stamkos required surgery to repair a broken leg that likely cost him a chance to represent Canada at the Sochi Olympics.