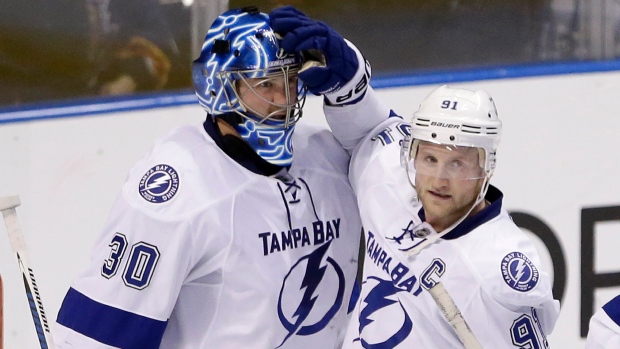 SUNRISE, Fla. - Steven Stamkos broke out of his scoring slump in a big way Saturday night.

Stamkos had two goals and an assist to lead the Tampa Bay Lightning to a 4-0 victory over the Florida Panthers.

The goal was the first for Stamkos since he scored in a 3-1 win March 20 against Detroit, a span of eight games.

"I knew if I kept working hard that things were eventually going to go in, so I just tried to shoot the puck a little more today and got some nice passes, and those ones go in," he said.

"You can't keep him down for long," Lightning coach Jon Cooper said. "It was great to see him bust out, especially when it was a pretty tight game and there weren't a lot of scoring chances either way. For him to get those two, that was great for us."

Tyler Johnson also scored and Ryan Callahan had a goal and an assist. Ben Bishop stopped 34 shots in his fourth shutout of the season.

The Lightning won for the second time in six games and secured home-ice advantage for the first round of the Eastern Conference playoffs. Tampa Bay is tied with Montreal for first place in the Atlantic Division with 104 points.

"Home ice comes into play in a Game 7," Callahan said. "You want to have that one at home if you get there. Tonight that was one of our main focuses."

Roberto Luongo made 18 saves on his 36th birthday for the Panthers, who were eliminated from playoff contention. They will miss the post-season for the 13th time in the past 14 seasons.

"Disappointed. We were right there," Luongo said. "It's going to be a lot of what-ifs in the next week or so. I wish I would have played better down the stretch for the guys and maybe steal a game or two more, but unfortunately it didn't happen."

Stamkos gave the Lightning a 1-0 lead on a power-play goal in the second. He took a pass from Johnson high in the left circle and one-timed it past Luongo at 6:10.

Stamkos made it 2-0 on his second goal. His shot from the right circle got past Luongo and went high into the net at 11:19 of the second. The goal was Stamkos' 42nd of the season.

Callahan stretched the margin to 3-0. His shot from the right circle went off Luongo's pad and trickled across the goal line 1:03 into the third.