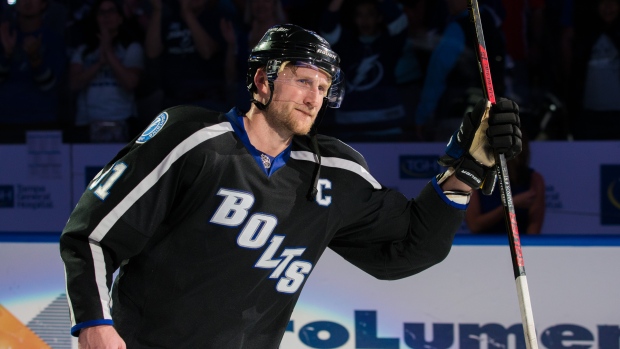 What began as discomfort for Steven Stamkos suddenly morphed into something much more serious on Saturday.

Stamkos, 26, is expected to make a full recovery but will miss the next one to three months of action, raising the spectre he has played his last game in a Lightning uniform.

Stamkos is all but guaranteed to miss the first round of the Stanley Cup playoffs, which begins on April 13, but could be sidelined for much longer. The last possible date for the Stanley Cup final is June 18, a little more than two months from now.

“Obviously, this situation is extremely disappointing because I wanted to help my team clinch a playoff spot and prepare for the start of the postseason,” Stamkos said in a statement. “During my recovery, I will do all I can to help my teammates, and I hope to rejoin them soon in the Stanley Cup playoffs.”

Losing Stamkos, the Lightning’s leading scorer, is a brutal blow to a roster which is already missing one of their top defencemen in Anton Stralman. Stralman is out indefinitely after a non-displaced fracture of his left fibula last week.

Yzerman said the Lightning will consider all options with regard to recalling a player in Stamkos’ absence. He told reporters in Tampa Bay that he could not rule out the possibility of recalling embattled forward Jonathan Drouin, who was suspended for nearly two months of the season while awaiting Yzerman to fulfill his trade request.

Drouin, 21, returned to the AHL’s Syracuse Crunch on March 11. Since then, he has racked up nine goals and one assist for 10 points in 10 games; Drouin pushed his goal-scoring streak to five games on Saturday.

“No one is going to feel sorry for us,” Yzerman told reporters.

Stamkos will undergo surgery on Monday at Tampa General Hospital to treat a type of Vascular Thoracic Outlet Syndrome near his right collarbone, Yzerman said.

It is nearly the identical surgery Lightning goaltender Andrei Vasilevskiy underwent on Sept. 3, at the same hospital with the same doctor, to treat a blood clot near his left collarbone. Vasilevskiy made his first start of the season on Oct. 28 with the AHL’s Syracuse Crunch, nearly eight weeks later. The Lightning also indicated a longer injury timeline for Vasilevskiy than Stamkos, perhaps due to the sensitive nature of the goaltending position.

On Saturday, Stamkos missed his first game in more than two years, since he suffered a leg fracture in March, 2014. He was Tampa Bay’s only player to appear in all 77 games this year.

Despite a season rife with turmoil, Stamkos was closing in on his fifth campaign of 40 or more goals. He had five games to score four goals to hit that mark before Saturday.

Instead, Stamkos’ regular season will end with 36 goals and 28 assists for 64 points in 77 contests. He waffled back and forth between centre and wing at the will of coach Jon Cooper all year, making the move away from his preferred centre spot as recently as this week.

But his positional swap was just sampling of the headlines buzzing around him.

Stamkos entered the season without a new contract after Yzerman labeled him as the Lightning’s “top priority” last offseason. That led to boundless rumours and speculation as Stamkos has moved ever closer to becoming the first mega-star in NHL history to become a free agent at the prime age of 26.

Stamkos’ play seemed to be affected by all the commotion. In fact, his best hockey of the season didn’t surface until Yzerman announced on Feb. 15 that Stamkos (who held a no-trade clause) would not be traded before the Feb. 29 deadline.

With that peace of mind, Stamkos went on a tear with 14 goals and eight assists for 22 points in the 22 games leading up to Saturday’s blood clot discovery. The Lightning were also 14-7-1 in that span. The defending Eastern Conference champions can clinch their third consecutive playoff berth as early as Sunday after a rocky start to the year.

Yzerman reiterated Saturday, when asked by reporters if we might’ve seen the last of Stamkos in Tampa Bay, that his goal remains to re-sign Stamkos to a long-term extension.

Until then, Stamkos stunningly joins a growing list of NHL players who have been diagnosed with blood clots in the last three seasons. Earlier this year, Pittsburgh Penguins forward Pascal Dupuis was forced to retire due to the health risks associated. Tomas Vokoun similarly stepped away in 2013; Kimmo Timonen missed 66 games last season before winning the Stanley Cup with Chicago, where current Blackhawks forward Tomas Fleischmann monitors his blood clot history daily.