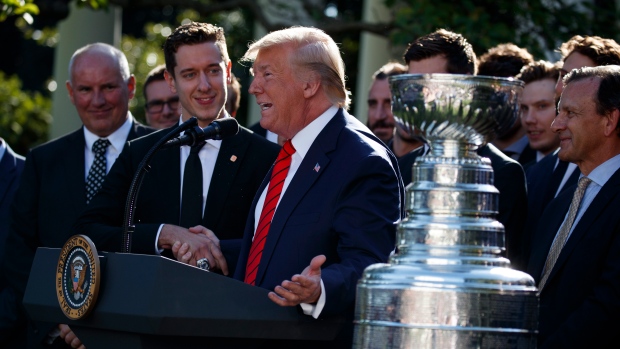 WASHINGTON — President Donald Trump honoured the Stanley Cup champion St. Louis Blues on Tuesday, using the occasion to announce an envoy to Turkey, mention the economy and an agriculture deal with China and laugh off the possibility of impeachment.

For the Blues, it was more of a last chance to celebrate the first title in franchise history than a political statement. Like previous NHL champions, they decided to keep with the long-held tradition of visiting the president at the White House amid teams from the NBA and other leagues either declining or not receiving an invitation or being disinvited by Trump.

St. Louis has a heavy concentration of Canadians and just one American still on the roster from the group that beat the Boston Bruins in the Cup Final. Every returning player from the Cup champions took the tour, met with Trump and was present for the ceremony in the Rose Garden.

"No matter what we do, we do it as a group," alternate captain Alex Steen said. "I think that's how we won. We're a very tight-knit group."

Trump veered off into talk about bringing soldiers home from overseas and the stock market and revealed Vice-President Mike Pence was travelling to Turkey to try to reach a ceasefire deal. When he circled back to the Blues, he went through their improbable run from last place in the league to champions with nods to Steen, owner Tom Stillman, captain Alex Pietrangelo, goaltender Jordan Binnington, forward Jaden Schwartz — who he called "Jason" — and playoff MVP Ryan O'Reilly.

"Being able to see (the Oval) Office and get a tour of the White House, it doesn't get much better than that," said Schwartz, who acknowledged he might have a new nickname. "This is (something) you'll remember forever."

Trump even mentioned the Blues adopting Laura Branigan's 1982 hit "Gloria" as their victory song, and the U.S. Marine Band played the team into the ceremony with that tune. Young fan Laila Anderson, who was the team's inspiration while she fought a rare auto-immune disease, got her own mention.

"You inspired the Blues all season, and today you continue to inspire all Americans," Trump said. "We all know your story."

Stillman, who presented Trump with a No. 45 Blues jersey, called it a "light-hearted, fun kind of celebration." He echoed Steen's sentiments about why the entire team showed up — a departure from when goaltender Braden Holtby and forward Brett Connolly skipped the 2018 champion Washington Capitals' visit in March in support of teammate Devante Smith-Pelly.

"I think this team acts as a team in everything they do," Stillman said. "They stick together. By and large, (I) like to keep politics and sports separate. This is a matter of a traditional honour, being invited to the White House by the presidency. It's something you do. I'm really proud of our group for all coming together and having a good time of it, as well."

NHL Commissioner Gary Bettman; Pence's wife, Karen; and Republican Sens. Roy Blunt and Josh Hawley of Missouri were among those in attendance for the half-hour ceremony.

Coach Craig Berube stressed the notion of the Blues' playoff run as a team effort and brushed off Trump's comment that the pressure was off after winning.

"We won the Stanley Cup, I think, once we got our team working together and playing together," Berube said. "When you play as a team, day in and day out — hard — you're going to be hard to beat. So that's what it basically boiled down to. These guys all came together as a team and played for each other, and we ended up being champions."

The Blues paraded down the streets of St. Louis, raised their championship banner, donated a Cup ring to the Hockey Hall of Fame and capped it all off by going to the White House. Now, players are eager to move on to trying to do it all again.

"It's a new year and new challenges and experiences," Binnington said. "We kind of still have this stuff lingering around, but obviously it's positive and it's amazing to experience that. But at the same time, yeah, it's back to work and simplify things a little bit. It'll be nice."