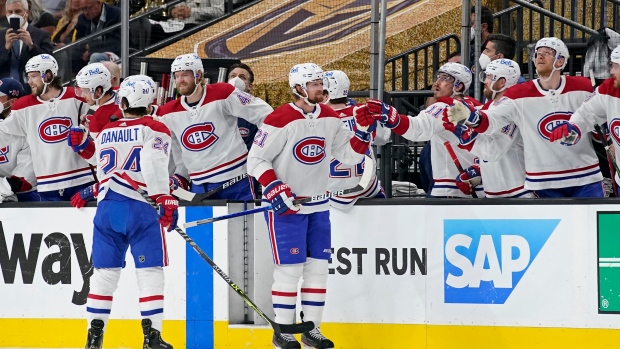 Just 20 minutes of shutdown hockey stand between the Montreal Canadiens and a commanding 3-2 series lead.

Eric Staal and Cole Caufield scored for the Habs in the second period as they lead the Vegas Golden Knights 3-0 heading to the third period in Game 5 of their Stanley Cup Playoff semifinal series.

After a Jesperi Kotkaniemi goal opened the scoring in the first period, Staal -- the No. 2 overall pick from the 2003 NHL draft -- took a nifty feed from Nick Suzuki and beat Marc-Andre Fleury -- the first overall pick 18 years ago -- up high to make it 2-0 for the visitors six and a half minutes into the second.

But Montreal kept on coming.

Skating in his 83rd career postseason game, Corey Perry streaked down the left wing and set up Cole Caufield in the slot as the rookie continued his impressive playoff run by burying the Habs' third goal of the evening and first on the power play.

The Canadiens have recorded 17 shots in the contest compared to 14 from the Golden Knights.

Game 6 will go Thursday night from the Bell Centre in Montreal. If necessary, the two teams will square off in Game 7 back in Vegas on Saturday.