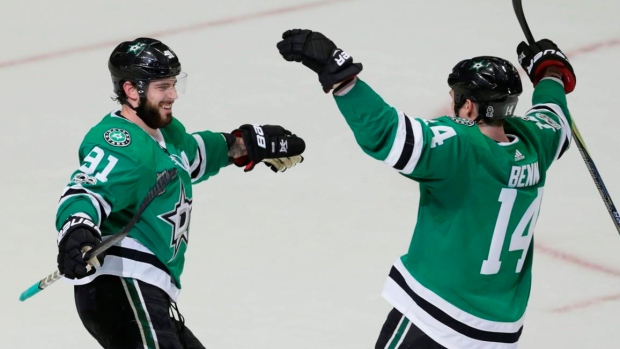 A day after Dallas Stars CEO Jim Lites ripped into his top two players, Jamie Benn and Tyler Seguin got an opportunity to respond on Saturday following their morning skate.

Both players were surprised by the comments as neither had spoken to or heard anything from Lites all season.

"A little bit of a surprise there, I guess, in one aspect because I obviously didn't know how he felt," Seguin said.

Benn, who has captained the Stars for the past six seasons, says he plays for his teammates first and foremost.

"I don't play for him [Lites]," Benn told the media. "I play for every player in this room, the coaching staff. I come to the rink and, like I said, I am proud to be a Dallas Star and I am proud to go out every night and battle with these guys in games. I really put my teammates first."

Lites' frustrated comments were published in a story on The Athletic website on Friday.

“They are f---ing horse-----, I don’t know how else to put it,” Lites told The Athletic's Sean Shapiro and Matthew DeFranks of The Dallas Morning News. “The team was ok. But (Tyler) Seguin and (Jamie) Benn were terrible.”

Dallas has a 19-16-3 record and sit fourth in the Central Division, but is still currently holding the second Wild Card spot.

But we’ve had meeting after meeting after meeting. The accountability on the ice is not there. These guys were signed to big contracts because they were the third- and sixth-leading scorers in the National Hockey League over the past five years. They get their money, we expect them to not be outplayed every game we play in. And if they were as good as they’ve been in the past we wouldn’t be having this conversation.”

Benn, 29, is in the second year of an eight-year, $76 million contract and earning $13 million this season (with a $9.5 million cap hit), making him the third-highest paid player in the NHL this season. He has 15 goals and 15 assists through 38 games this season. Seguin, 26, signed an eight-year, $78.8 million extension in the fall that goes into effect next season. He has 11 goals and 21 assists through the same 38 games.

Despite the harsh comments, Seguin says he know he and the rest of the team need to play better.

"Jamie and I hear the message. I think the whole team hears it," he said. "We know that we have to play better and we understand that. So, we're going to continue to work every day and keep getting better. I come to the rink every day, you know, the Stars are my heart and they're my team."

Benn said he spoke to many players around the NHL after the news broke Friday afternoon.

"The phone was blowing up like it was my birthday yesterday," explained Benn. "I got some messages from teammates, talked to ex-players and even other players around the league. What was communicated between me and those players and ex-players obviously you guys won't find out about."