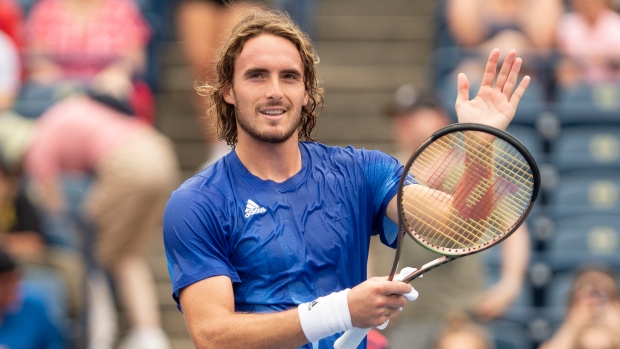 There have been few true challenges for Stefanos Tsitsipas at Toronto's National Bank Open this year.

Sure, Ugo Humbert of France forced the Greek No. 3 seed into a third set with an extended tiebreak in the second round, but Tsitsipas has been a dominant force on the court all week, winning each subsequent match in straight sets.

He clinched his spot in the semifinals on Friday with a solid 6-1, 6-4 win over No. 6 seed Casper Ruud.

"Every single opponent that I’ve had to face is someone that has played good in the past and has the level to face me straight. And I’ve dealt with these situations really well," Tsitsipas told reporters after the match.

Ruud, the world No. 12, came into Friday on a 14-match win streak, having collected recent victories at tournaments in Austria, Switzerland and Sweden.

Success on Canadian soil is nothing new to Tsitsipas. He made it to the finals of the tournament formerly known as the Rogers Cup in 2018, losing to Rafael Nadal.

He noted, though, that a place in this year's finals is no guarantee.

“I still have a few more matches to go, so not much to compare there, honestly. I’m happy where my game is at right now," said the world No. 3, who turned 23 on Thursday.

"Obviously I’m excited for what’s to come. And I’m always, every single day, trying to come up with solutions and ways this is going to be easier and more efficient for me.”

Tsitsipas jumped out to an early 5-0 lead over Ruud on Friday, winning 2-of-3 break points and 84 per cent of his service points in a brisk 23-minute first set.

The Norwegian battled back in the second, holding serve and keeping pace with his opponent's repeated drop shots until Tsitsipas finally broke him with a shot down the line to take a 5-4 lead.

Tsitsipas finished off the one hour 14-minute match with an ace, his eighth of the day.

On Saturday, he'll take on American qualifier Reilly Opelka, who edged No. 10 seed Roberto Bautista Agut of Spain 6-3, 7-6 (1) on Friday.

Tsitsipas and Opelka have only played once before on the ATP Tour, facing off at the Western & Southern Open last August. The American was up 6-5 in the first set when he bowed out with an injured knee, and Tsitsipas advanced to the semifinals.

Daniil Medvedev of Russia, the top seed at this year's National Bank Open, ousted Poland's Hubert Hurkacz, the No. 7 seed, in a quarterfinal matchup later Friday. Medvedev took the match 2-6, 7-6 (6), 7-6 (5).

American John Isner topped No. 11 seed Gael Monfils of France 7-6 (5), 6-4 in the nightcap to set up a showdown with Medvedev.

This report by The Canadian Press was first published Aug. 13, 2021.