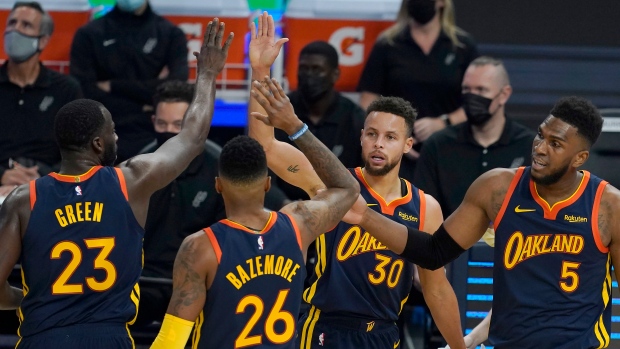 SAN FRANCISCO — Stephen Curry and the Golden State Warriors brought it on both ends in their most complete game yet.

They brought it for new Vice-President Kamala Harris, honouring her Oakland roots.

Curry had 26 points, 11 rebounds and seven assists, and the Warriors beat the San Antonio Spurs 121-99 on Wednesday night wearing their old city of Oakland across their chests.

Rookie James Wiseman added 20 points and six rebounds, and Draymond Green had six of the Warriors' 31 assists. Golden State made it consecutive impressive wins after erasing a 14-point deficit in the fourth quarter of a 115-113 road victory against the Lakers on Monday.

“I think it was our best game. It was the best two-way basketball game we’ve played all year,” coach Steve Kerr said. “Our defence was excellent, we put a lot of pressure on them, stayed really solid, made good rotations, rebounded well. And then at the other end when you’re forcing misses, offence becomes a lot easier, so we were able to get into a flow.”

The Warriors debuted their “Oakland Forever” jerseys for Inauguration Day. Oakland native Harris was gifted one signed by Curry featuring a special congratulatory message from the two-time MVP and his urging to show it off in Washington.

Dejounte Murray scored 22 points for the Spurs, who had won the past three meetings with the Warriors and five of six.

San Antonio was coming off its biggest win of the season, beating the Trail Blazers 125-104 at Portland on Monday. Four players ages 30 or older scored 20 points, the first time it has been done since 1998 by Houston.

Andrew Wiggins, who has been dealing with a sore right knee, knocked down consecutive 3-pointers in the fourth quarter on the way to 18 points for the Warriors.

The Spurs trailed 43-36 with 5:56 remaining in the first half, then Golden State subbed Curry and Green back in and went on an 18-4 run.

“I thought we had a bad start. They jumped on us in the beginning of the game for whatever reasons and we never got back,” coach Gregg Popovich said. "But if you shoot 4 for 33 from 3, your defence better be pretty perfect and it wasn’t.”

In a video the Warriors showed at halftime and also posted — Kerr called it “brilliant” and shared it widely — Harris promised to display the framed jersey in her White House office.

“I will proudly, proudly display this. You always bring such joy and pride to me as a daughter of Oakland,” said Harris, sworn in earlier in the day on Capitol Hill. “This is really so very special, so thank you all, and I hope to see you soon. Go Warriors!"

While Golden State did hold a morning shootaround, Kerr found time to watch some of the inauguration, which he called “beautiful. ”

“It’s a great day,” Kerr said. “It’s one of the reasons we’re wearing our Oakland jerseys tonight. We’re taking great pride in the fact that Kamala Harris is from Oakland and was inaugurated today as vice-president. Just a huge day, obviously, in our nation’s history and for the Bay Area as well. So it’s great to be able to honour her and her big day by wearing this uniform.”

Spurs reserve guard Patty Mills struggled in his latest Bay Area homecoming, shooting 3 for 11 and missing all seven of his 3-point attempts for just six points.

“He’s having an incredible, incredible journey. He keeps getting better and better," Bennett said. "He’s having one of his best years. He definitely would be in the talk of 6th Man of the Year.”

Warriors: Damion Lee was ejected with 9:02 left following a Flagrant 2 foul. ... The Warriors are 6-1 on Inauguration Day, dating back to Harry Truman’s 1949 inauguration.

Warriors: Host the Knicks on Thursday night to complete a back-to-back.