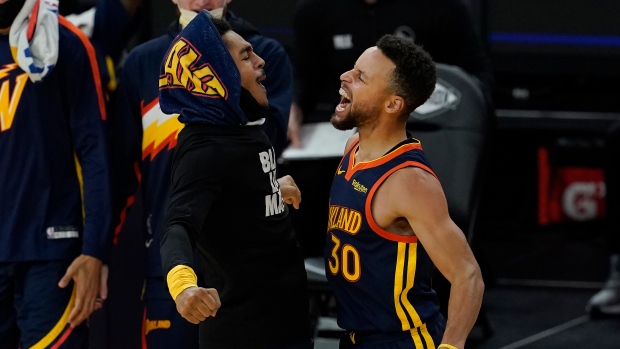 Playing the Timberwolves for the first time since his trade last February, Wiggins showed a steadiness that was missing at times when he played in Minneapolis. He drove the lane for pull-up jumpers, dunked, hit from long range, made three steals, blocked three shots and grabbed all six of his rebounds on the offensive glass.

Curry shot 11 for 21 overall and 7 of 12 from deep as the Warriors avoided their first three-game losing streak of the season.

Malik Beasley scored 30 points with four 3s to lead Minnesota, which fell behind early with poor shooting and failed to gain any momentum from snapping a four-game losing streak Saturday.

Curry has 2,569 career 3-pointers after he passed Reggie Miller for second place in NBA history in Saturday's road loss to the Jazz. Ray Allen is first with 2,973.

Miller offered a congratulatory message on the big screen Monday during a first-quarter timeout.

Golden State delivered a far better start after falling behind 14-0 to the Jazz and trailing by as many as 40 in the 127-108 defeat at Utah.

D'Angelo Russell was held out in what would have been his first matchup against his former Warriors team because of a bruised right quadriceps muscle.

Russell played 33 games for Golden State last season before the trade that brought Wiggins to the Bay Area.

“Well, last year was a complete mess for our team and our organization with all the injuries. We were fortunate to be able to sign D'Angelo," Kerr said. “D'Angelo was a really productive player for us. He shot the lights out, had some big games."

Kerr mixed it up by starting Kevon Looney at centre instead of rookie James Wiseman to improve the defence with a more veteran unit.

Kerr spoke to Wiseman earlier in the day, and the No. 2 overall draft pick handled it well. He will slide into Looney's role coming in midway through the first and third quarters.

“He understands it’s not a demotion by any means, it’s simply a part of his development," Kerr said.

Wiseman dunked on a putback off a missed 3 by Curry midway through the third.

Timberwolves: Jarred Vanderbilt took a hit to the eye when fouled by Draymond Green at the 5:34 mark of the third, then Green got hit with a technical. ... Minnesota hasn't won on the Warriors' home floor since a 124-117 overtime victory on April 5, 2016. ... Ricky Rubio shot just 1 for 8 but dished out 11 assists. ... Minnesota C Karl-Anthony Towns missed his fifth straight games after announcing Jan. 15 he tested positive for the coronavirus. The Timberwolves are 2-10 without Towns in the lineup this season — one of those wins a 120-110 home victory Saturday night against the Pelicans.

Warriors: Golden State totalled 45 bench points, with everybody but rookie Nico Mannion scoring. The plan is for second-round pick Mannion to go to Orlando for the G League bubble along with Jordan Poole and Alen Smailagic, who is getting close to being able to practice as he works back from surgery for a meniscus tear in his right knee. “It's something I think could be very productive for all of them,” Kerr said.

The teams square off again Wednesday night at Chase Center to complete their two-game series.