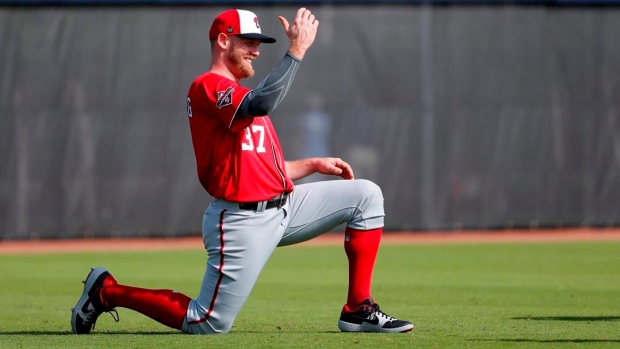 The World Series MVP opted out of his contract to become a free agent following last season, then re-signed with Washington for $245 million over seven years.

“It's a combination of the workload last year but also just, it's a long season so you've got to build up gradually for it,” Strasburg said of his measured pace.

Strasburg was 18-6 with a 3.32 ERA last season, topping 30 starts for the second time in his career and leading the NL with 209 innings. He went 5-0 with a 1.98 ERA in five post-season starts and one relief appearance, including wins in Games 2 and 6 of the World Series against Houston.

He is to throw a bullpen session on Tuesday, then possibly pitch in a game this weekend.

Manager Dave Martinez expects left-hander Patrick Corbin to throw a batting practice session as early as Wednesday, then appear in a game a day or two after Strasburg. Corbin threw 23 1/3 innings during the post-season after going 14-8 with a 3.25 ERA in 202 innings.

“He talked about how he liked to work out soreness early in camp so it's something he doesn't have to think about later on or have pop up later on,” Martinez said. “But he's in a good spot right now..”

Right-hander Righty Anibal Sánchez is to pitch in a game Tuesday, two days before his 36th birthday. He was 11-8 with a 3.85 ERA for the Nationals last season.