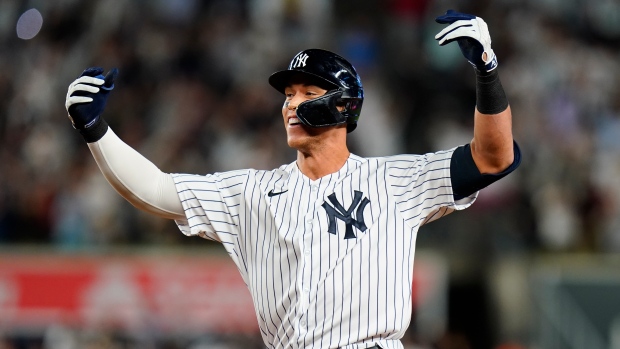 He is a mammoth of a man who’s hard to miss. His presence in Major League Baseball is profound.

At 6-foot-7 and 282 pounds, New York Yankees outfielder Aaron Judge is bigger than life. He looks different than almost any other baseball player. He could be mistaken for an NFL tight end. He could pass for a power forward in the NBA.

But above all, the 30-year-old Judge is a humble superstar who always puts his team first. He is the face of the Yankees. He is the Derek Jeter of this edition of the Bronx Bombers.

This season, Judge is on the verge of making history.

It has been 61 years since former Yankee slugger Roger Maris hit his 61st home run on the last day of the 1961 season. Yes, read that again! Sixty-one years since Maris hit 61 homers in the ‘61 season. It feels like the stars are aligning.

Judge, who has 46 home runs so far this season after Wednesday’s 8-7 win in over the Tampa Bay Rays, is on pace to hit 64.

It was a magical season that was celebrated by fans, players and the media. The single-season home run record was shattered. Even Maris’ family was there to celebrate McGwire in a sort of passing of the torch.

Three years later, in 2001, San Francisco Giants outfielder Barry Bonds mashed 73 home runs. Another new single-season home run record. The record books recognized McGwire as the record holder for three years and now Bonds has been on top since that 2001 season. The record books tell a story, but not the whole story.

Bonds, McGwire, and Sosa all cheated the game. They have all been tied to using performance-enhancing drugs. Steroids increased their power and strength. HGH aids recovery and enhances the impact of steroids. HGH also improves vision, which for baseball players is crucial in recognizing balls from strikes, fastballs from breaking balls. It is impossible to quantify the impact of the performance enhancement on their home run totals.

There has been no movement to put an asterisk next to Bonds name in 2001 or McGwire’s record-setting season in 1998. But the debate rages on as to who really holds the record.

There is no debate for me. Maris is the single-season home run leader.

If Judge can set the record, or even come close to it, he will have had one of the best offensive seasons ever. He currently has an adjusted OPS+ of 198. This means he’s 98 per cent better than average (100 adj OPS+ is average). This is an offensive statistic which takes into account ballpark and league factors. He is also on pace to accumulate wins above replacement close to 10, which is elite performance. In addition to his record-setting home run season, he’s also on pace for 139 RBI and 132 runs scored.

It was going to take a Herculean effort by someone to unseat Los Angeles Angels star Shohei Ohtani as the reigning AL MVP. Nobody can do what Ohtani does as a two-way player, but someone who is significantly more extraordinary as a hitter can have a chance at the MVP award. If Judge hits more than 61 home runs, he will win the MVP. If he doesn’t go over 61, I think he should still win the MVP award.

Judge’s timing for this remarkable home run chase and season could not come at a better time. He is a free agent after this season. He rejected a $213.5 million contract offer from the Yankees in spring training and has his sights set on a mega payday, which he will get.

The big question is, how aggressively will the Yankees pursue him. Despites his remarkable season, the fact is that he has been injury prone in his career, plus he turns 31 early next season (April 26). A great, healthy season mitigates those facts a bit, but not completely.

I know the Yankees appreciate Judge’s talents and how he represents their franchise both on and off the field. They want to sign him and keep him in pinstripes for as long as possible. But it is the “as long as possible” that will be the deciding factor in the negotiations.

Judge will want a 10-year deal and Brian Cashman, the Yankees general manager, will likely not want to go more than seven years. If the Yankees lose Judge, it will be because of the length of the contract. I could see the New York Mets, Boston Red Sox, Chicago Cubs and Texas Rangers all potentially chasing the Linden, Calif., native.

Judge’s rejection of the Yankees spring training offer will turn into a windfall. At this point, I would want to make a deal for seven years and $245 million and might go the eighth year ($272 million) but only if it closed the deal.

Aaron Judge bet on himself and won. But if offers go beyond the eighth year, then I would let him walk away and spend my money elsewhere.

- Ross Stripling came off the injured list on Wednesday and gave the Toronto Blue Jays just what they needed.  The Jays offence has been struggling and they needed a shut-down performance from a starter. Stripling allowed just one hit over 6.1 innings while striking out seven and not allowing a walk in a 6-1 win over the Baltimore Orioles at Rogers Centre. He was the stopper they needed. Plus, his return gives the Jays the option to use newly acquired Mitchell White in struggling Yusei Kikuchi’s spot in the rotation.

- The Jays offence has been anemic over the last week. It isn’t a surprise that when the offence erupted in the seventh inning on Wednesday afternoon, George Springer was in the middle of it with a big pinch-hit RBI single and he then scored on a Santiago Espinal double, sliding headfirst across the plate then unleashing a celebratory scream. He is the key for the Jays offence over the next couple of months. The Jays needed a big hit, and they got it.  It was Springer’s first pinch hit of his career and the 1000th hit of his illustrious career.

- The Jays play the Yankees in a four-game set starting on Thursday in New York. As poorly as the Jays have played in the month of August, the Yankees have been worse. They are 3-11 this month and their offence has been worse than Toronto’s as they’ve scored fewer runs per game. The Yankees have the second-best pitching in the American League this season but in August their 3.97 ERA is ranked 10th. They aren’t scoring like they were before the calendar hit August nor are they pitching like they have all season. Remember, sometimes it‘s not who you play, it is when you play them. Now is the time to play the Bronx Bombers.