Baseball is a funny game. There are things that happen almost on cue.

A player is out of position, but the ball immediately finds him. An announcer says the pitcher has a no-hitter in progress, but the next batter he faces gets a hit, ending the no-hit bid. And when a team is short on pitching, they suffer injuries to their staff.

I wrote last week that the Blue Jays were at least one predictable starting pitcher short and that is being magnified already. Nate Pearson’s groin strain will likely land him on the injured list and has forced the Jays to call upon the depth in the organization even before the marathon of the season begins. Veteran lefty Robbie Ray slipped and fell down some stairs in his home, bruising his pitching elbow.

Why do things like this always seem to happen to teams that have very little margin for error on the pitching staff?

If a team is not as deep or strong in starting pitching, then they need to rely upon the depth and quality of the bullpen for support. The Jays have plenty of inventory with differing ranges of experience and pedigree in the bullpen. They believed they had a good plan.

But then that thing that happens in baseball, happened.

Closer Kirby Yates is now lost for the season and has had Tommy John surgery without throwing one pitch as a member of the Blue Jays. Well, it was nice to meet you Kirby – have a nice life.

So, now the Blue Jays have been attacked by the injury bug at the front of the game as well as at the back of the game.

As I have said, I am surprised that the Jays didn’t sign a veteran predictable pitcher like Taijuan Walker (3 years/$23 million with the New York Mets), Jake Odorizzi (3 years/$23.5 million with the Houston Astros) or J.A. Happ (1 year/$8 million with the Minnesota Twins) to protect their starting rotation. These players are all solid starting pitchers, who didn’t break the bank for the teams they signed with.

Even more surprising is that the Jays chose not to protect their signing of Kirby Yates with another veteran reliever who could be the closer.

Reports surfaced that Yates’ deal with the Jays had to be renegotiated after Yates’ effectively failed his physical. Anomalies were found in the MRI of his throwing elbow. He missed the pandemic-shortened 60-game 2020 season because he had bone spurs removed from the same elbow. Bone spurs are like callouses that form when two bones rub together. This occurs in the elbow when there is damage (tear, fraying or stretching) to the ulna collateral ligament.

The damage seen in the MRI was significant enough for the Atlanta Braves to walk away from their deal with Yates that was made before the Blue Jays were engaged. The Blue Jays took a chance on Yates while mitigating the risk. His $8.5 million salary became a $5.5 million guarantee with a chance to earn $3.5 million in bonuses. Unfortunately, the Jays got burned.

Shoulda, Woulda, Coulda. What now? It is not too late for Toronto to build in protection and depth.

If I were running the Blue Jays, I would immediately call veteran right-hander and former Cy Young Award winner Rick Porcello. I would try to sign him to a minor league deal. I would also do the same with former closer Shane Greene. Both are unsigned free agents and both are just 32 years old.

Porcello pitched with the Mets last season where he went 1-7 with a 5.64 ERA. It wasn’t as bad of a season as those numbers indicate. He actually had a 3.33 FIP, which takes into account the level of defence played behind him. Porcello is a ground ball pitcher and the Mets infield defence was a bit porous last year.

Greene pitched in 28 games with the Atlanta Braves last year and was 1-0 with a 2.60 ERA. Despite a drop in his fastball velocity, he held the opposition to a .229/.306/.333 slash line. He has 66 career saves with the Detroit Tigers. Greene also threw six innings in the postseason for Atlanta and allowed just one run.

The Jays could offer both of these pitchers a chance to sign and go to the alternate site to get in shape to join the team. It would be very inexpensive, considering they don’t have a job this late in the spring. They could both have an out in their deal that stipulates if they are not in the major leagues by May 4 – the start date of the minor league season – they could then request their release to sign elsewhere. It’s worth a shot. 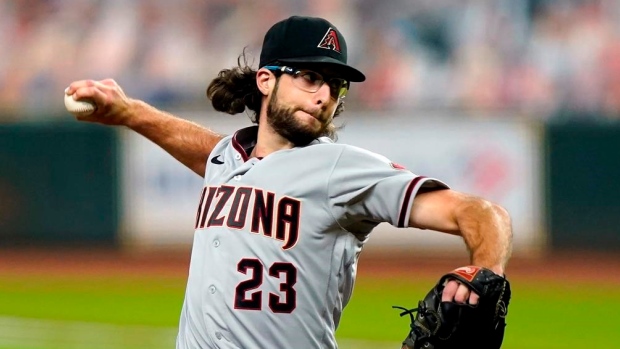 Earlier this spring, we saw Chicago Cubs starting pitcher Kyle Hendricks tumble at first base trying to beat out a hit. Fortunately, he was safe, but more importantly, he wasn’t injured.

Arizona Diamondbacks starter Zac Gallen is not so fortunate. Back on March 10 during a batting practice session, he got jammed on a pitch and felt a twinge of pain in his right forearm. He didn’t think too much of it. In his next two starts, however, he felt pain in the pitching forearm especially when throwing his curve ball. Tests showed that he has a hairline fracture in his forearm and will likely be on the injured list as the season begins.

Despite intense negotiations, MLB owners and players could not reach an agreement to institute the universal designated hitter rule this season and avoid these situations altogether. It was in place in 2020 in the 60-game schedule as part of the health and safety protocols because we had a shortened summer camp after the delays due to the pandemic. There wasn’t an appropriate amount of time to prepare pitchers to pitch, let alone hit. Despite the fact that many club officials and players still think that it is not safe or healthy for pitchers in National League ballparks to hit, they will do so in 2021 during the full 162-game season.

Owners believe that the universal DH has financial value to players who can extend careers or find a niche if they can’t play defence. They wanted to trade that benefit for expanded playoffs which would have financial benefits to the owners, and even the players to a lesser degree. The two sides could not reach an agreement on the topic. The owners offered it, but the players rejected it.

Gallen is frustrated because he is a pitcher who would simply rather not hit. There are some pitchers who love to hit, but he is not one of them.

When pitchers get injured while batting, they have no one to blame but their own union, the Major League Baseball Players Association. They had an opportunity to avoid these unfortunate situations and chose a negotiating strategy over the health of their constituency. What a shame.