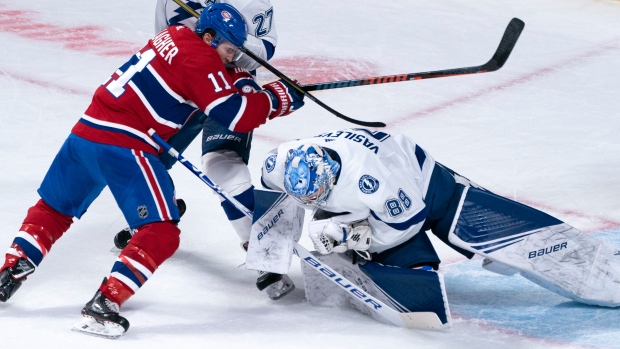 MONTREAL — Two breakdowns by the Montreal Canadiens was all Tampa Bay needed to secure victory.

The visiting Lightning took advantage of two key mistakes — a long shift and a bad line change — to sink the Canadiens 3-1 on Tuesday night in the fifth game of a six-game road trip.

Andrei Vasilevskiy made 33 saves for the Lightning (3-2-1), who were coming off a 4-2 loss to the Ottawa Senators.

"For the first good chunk of the first period, we were executing and playing our game," said Montreal defenceman Jeff Petry, who scored his second goal of the season. "Toward the end of the first, we got away from it.

"The breakdowns led to them taking the lead and we weren't able to fight back."

Montreal's first costly mistake came in the dying seconds of the first period.

After Petry scored the opener on a one-timer on the power play at 15:46, Claude Julien's squad nearly took that 1-0 lead into the first intermission but intense pressure by Tampa Bay led to the equalizer.

The Canadiens (2-2-2) got caught in their own zone for a shift that lasted a lengthy 1:54. Exhausted and unable to change, the five players failed to clear the puck on multiple occasions before Braydon Coburn beat Carey Price over the shoulder with seven seconds on the clock.

"We did a great job of hemming them in their zone," said captain Steven Stamkos, who leads Tampa with four goals. "We were the beneficiaries of getting on the ice against some tired players. We were able to get some fresh legs and we capitalized.

"Any time you give up a goal at the end of a period is a momentum killer. We were on the right side of that one tonight."

The Lightning rode that momentum into the second period, scoring twice in a 57-second span and forcing Montreal to make its second crucial error.

After Stamkos made it 2-1 on the power play at 1:04, Ryan McDonagh caught the Canadiens on a slow line change with a stretch pass that led to Tyler Johnson's 3-1 goal at 2:01. The Lightning scored three times on their first 10 shots on Price, who stopped 19-of-22 shots in defeat.

"Our biggest problem since the beginning of the season is we're not playing 60 minutes," said Julien. "We need to correct that aspect of our game if we want to win more games.

"We couldn't clear the zone for almost two minutes. That cost us on a goal. On the second one, it was a bad line change that hurt us. It's self-inflicted. Those are things we just can't do."

Montreal made no changes to the lineup that downed the defending Stanley Cup champion St. Louis Blues 6-3 on Saturday night at Bell Centre. The Canadiens came into the matchup with the league's fourth-best offence, scoring four goals per game.

The home side came out strong in the third period but Vasilevskiy turned away every offensive wave. Last year's Vezina Trophy winner made 14 saves in the third alone and improved to 8-1-2 in his career against Montreal.

"He made some great saves," said defenceman Victor Hedman of the 25-year-old Vasilevskiy. "His reaction time, he's so quick in the net. Vasi is the best goalie in the world and he proved that again today."

Montreal's 28th-ranked penalty killing continues to surrender goals — the one conceded to Stamkos was the seventh in six games this season. That goal came moments after Artturi Lehkonen hit the post at the other end.

Notes: Nikita Kucherov had two assists. … Jonathan Drouin's five-game point streak came to an end. … Montreal finished 1 for 5 with the man advantage. … The Lightning were 3-1-0 versus the Canadiens last season.