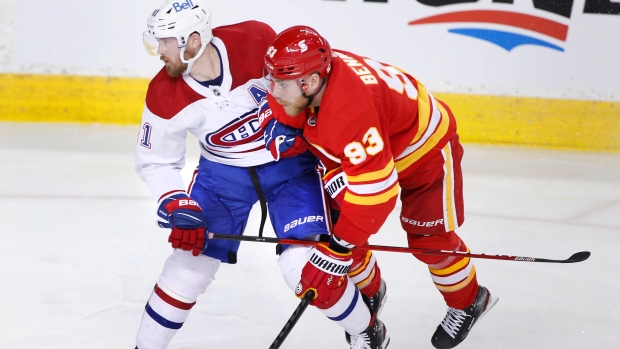 What is the difference between a reason and an excuse? That was the question posed by yours truly a mere 48 hours ago after the Montreal Canadiens capitulated at the hands of the Calgary Flames.

It seemed to most that there was quite an obvious reason why the Habs could not gain a foothold in the game.  Just under 20 hours earlier they had produced an emphatic display against the Vancouver Canucks while reduced to five defencemen.  Therefore, their lacklustre effort was almost accepted by a fan base that rarely accepts a loss.

Which is what makes last night’s 3-1 loss to the Flames totally inexcusable.

Consider the context.  Calgary is likely the only team in the division that can prevent the Canadiens from reaching the playoffs.  The next time they face the Flames is a month from now, when their matchup will be even more crucial in terms of postseason participation. The Habs could have stretched their lead to four points with a game in hand to give themselves just the semblance of a breath at the halfway point of the season.  What an opportune time to lay down a marker.  Prove that Thursday’s performance was due to weariness and not commitment to the cause.  Instead the team produced one of their worst showings of the season, putting a fast start firmly in the rearview mirror as they look set to be in a dog fight down the stretch.

Joel Armia followed up a superb early shift when he dominated the puck, with a boneheaded play behind his goal line that put the Habs down 1-0 and back on their heels for the next 35 minutes.  The Flames were clearly energized but it doesn’t explain the sloppiness that permeated through the Canadiens lineup the rest of the way.

“The energy was good in the group”, said a baffled interim head coach Dominique Ducharme on another one of his team’s slow starts.  “So I was a little bit surprised to see how we were just not moving our feet and just kept (letting them come)”.

Everything seemed extremely hard for the Habs, even after the first.  Passers couldn’t pass and receivers couldn’t receive.  Both forwards and defencemen were second to loose pucks all night long.  No rush chances could be generated due to their sloppiness and no offensive flow could be sustained due to their low effort level.  Put simply, Calgary just wanted to win much more than the Canadiens.  The effort level in one-on-one battles was porous at best and pitiful at worst.  It was a dejecting performance from a team that was given the benefit of the doubt just two days earlier.

“I wouldn’t say there’s a concern I think it’s just more of a disappointing feeling,” said a struggling Nick Suzuki post-game.  “We know we can be a good team.  These points are going to matter a ton coming down the stretch and over the halfway mark.  We need to pick up points, we need wins and it’s got to come fast for us. We need to start building our game”.

That’s at least the right sentiment from the sophomore centre who is going through the first tough stretch of his young career.  Credit to the Flames, they made him a target of physical play throughout.  But for the better part of a month now Suzuki has not been skating well, looking just a second off the pace.  His confidence with the puck is lacking.  His wave of the power play has been the one that has struggled.  It must be maddening for Canadiens fans that as Jesperi Kotkaniemi has started to pick up his game, Suzuki has sunk back into the shadows.  Just as Kotkaniemi looked underwhelming as Suzuki thrived.  This is the bed the organization has made for themselves, depending upon these two young centremen.  And when their inconsistency overlaps it can be the deciding factor, as it was last night.

Not that there were many veterans who could stand up and be counted on.  Quite possibly amongst the forwards only Corey Perry and Brendan Gallagher looked engaged.  On defence, the now by default first pairing of Joel Edmundson and Jeff Petry were acceptable, even after getting caught out of position on Mikael Backlund’s back-breaking third goal.  The less said about the pairing of Victor Mete and Brett Kulak, the better for both of them.

Over their last 10 games, the Canadiens have only won three games.  That is behind even the hapless Ottawa Senators for the least amount of victories in the division over that stretch.  Basically, without the overtime loss point, the Habs would be just a single point up on the Canucks.  Yes, the same Canucks the Habs have beaten soundly so far this season.

Is that who this team is?  If so, based on former goaltending coach Stephane Waite’s comments after getting fired, Canadiens GM Marc Bergevin will be firmly on the hot seat and could be compelled to make a significant move at the trade deadline to save his job by getting this team into the playoffs.

The road doesn’t get any easier, starting Monday.  Their next five games are against the two hottest teams in the North, the Jets and the Oilers.  If the Canadiens display the same kind of compete level as they did last night, they will have spoiled a season that began with such promise.  And a new administration will almost certainly take over the direction of the club.

Not the reason the team lost whatsoever.  But it’s not like he was peppered with high quality chances.  Could have used a timely save on either Monahan’s second or Backlund’s goal to keep the game in reach.  Once it was 3-0, it was over.  But his responsibility for last night’s showing resides way at the bottom.

Back to back poor performances from the captain.  Got beat to the front of the net by Tkachuk on Monahan’s second.  Distribution was back to being erratic, whether short or long passes.  Lost too many physical battles down low for a man of his strengths.

Started off poorly again.  But began skating well just after the halfway point of the second which opened up passing lanes to finally get the Habs out of their zone with possession. Made some of the few slick plays in the offensive zone in the third.  But his pairing with Weber has not gotten off to the smoothest of starts.

The lone above average performance on the night.  Rightly led the team in ice time.  Scored his league leading 11th goal by a defenceman.  Was beaten by Mangiapane on Backlund’s goal but poor positioning by his partner was the main culprit.  When he activates into the offensive zone, the Habs look good.  Needs more support from others at his position.

He was decent enough except for losing Backlund on his backbreaking goal.  Other than that his positioning was good.  Where he struggled more than he has of late was his passing.  Couldn’t break the puck out to his forwards effectively.

His pairing with Mete was a disaster from the start.  Got in each other’s way repeatedly.  Caved into their own zone and couldn’t stop the cycle.  The only thing saving him from a lower rating was the performance of his partner.

Mean no disrespect but last night was as close to a validation that he is simply a seventh defenseman.  Too small to kill the cycle, which got him pinned into his own zone a lot.  Can’t handle man-to-man down low.  His passing, which is supposed to be a strength, was underwhelming.  If all he can do is skate with the puck on his stick and get killed in every other facet of the game, is he worth keeping in the lineup?  Cale Fleury beckons.

Wonder if he’s banged up a bit because he has been off for a while now.  Was the Habs’ most used centremen and yet his stat line had zeroes across the board.  Better on faceoffs.  That’s really the only positive for him from last night.  Needs to skate to make anything happen offensively.  Too easy to shut down right now.

Did he have a great game? No.  Looked out of place trying to fill in for Danault in the first, which is what he was.  For the first time in a long time he’s had two subpar games.  Needed more intensity last night.  But it was also his skill up high that set up Petry for his goal.  Just wish we would’ve seen it more often.

Eerily quiet night for him in a game you would have thought he’d be foaming at the mouth for.  No hits on the night tells the story.  Frustratingly, the puck was a hot potato for him as he fumbled it all over the ice.  Didn’t have the blazing speed going at all.

Looked like he was never going to do much of anything but it was pretty obvious that he got injured in the first and soldiered on.  Too bad his teammates didn’t put in a shift for him.  Did what he could defensively.  All you could really ask of him.

Had a very promising first shift.  Then set the tone for the first two periods when he conspired against himself, turning the puck over behind the net despite several options to move the puck to a teammate.  Monahan put it into the top corner soon afterwards and the Flames had life.  Vanished from the game after that.

Looked decent on the power play.  But missed a glorious chance to take another step forward with Danault injured.  Didn’t do much with the more than 18 minutes in ice time he received, especially at even strength.  Only one shot on goal and no real chances to speak of.  Better on faceoffs.

Gets the rating as the only forward who really showed any level of fight.  Which is not unexpected.  Shots from the outside mostly.  But can’t take those offensive zone penalties, although the second one was rather weak.  One of the few willing to pay the price in tight.

Largely absent for long stretches of the game.  But he’s done his part numerous times this season.  Others need to step up.  The Canadiens’ most used forward and at least tried to make things happen with the Flames backing off in the third.  Never got a real prime scoring chance to test Markstrom.

Talk about a bad time to fill in at centre.  With Danault going down early he probably wished Jake Evans was playing.  Was in on a break but lost the handle making a move in tight.  Could have been on another one if Kotkaniemi had made a better pass.  Did okay enough in that spot.  But a centreman he is not.

His game is so simple, why don’t more do it.  Win a puck battle on the boards, move it down low, crash the net.  Not sure why he didn’t receive a promotion with nearly everyone else struggling.  Had the best chance on the power play but rang a clever backhand off the post.

Expected more from him after a lengthy stint in the press box.  Lost body position on Monahan for his second on the power play.  And chucked some lovely 40 foot wristers to the net to be gloved and held.  That’s about it.  Least used Habs forward.  Where’s the intensity, especially after the layoff?

His players just lost the plot after Armia’s turnover for Monahan’s first.  Hemmed in the rest of the first and unable to complete a couple of passes in the second.  Gained a foothold in the third but only because the job was done and the Flames were content to sit back.  Sitting Jake Evans came back to haunt him when Danault got injured.  Needs to have a sit down with Suzuki.  Find out what’s going on.  Would have liked to see some line changes with who was going but they couldn’t have had five good players playing at a time