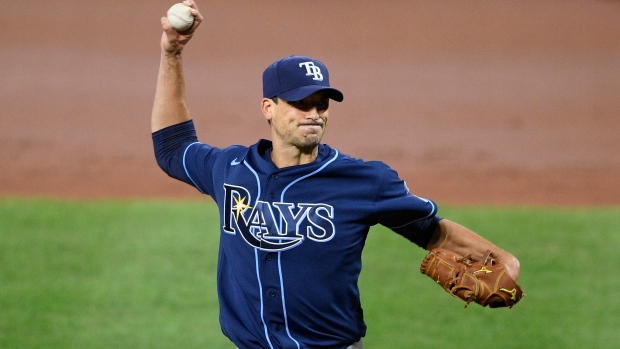 Arozarena's two-run drive in the fifth off Jorge Lopez (2-1) put the Rays up 3-1, and that was enough offense to ring up another win over the skidding Orioles. Tampa Bay will strive to complete a five-game sweep on Sunday.

With a playoff berth already in hand, the Rays' next objective in this abbreviated 60-game season is to win the AL East title for the third time in franchise history.

Although the second-place Yankees beat Boston on Saturday night to remain 3 1/2 games back, Tampa Bay whittled its magic number to clinch the division to four.

"I think that's been a driving factor for everybody in this clubhouse since this all started," manager Kevin Cash said before the game. "We want to keep cutting and reducing that number down."

The Rays have won seven of nine to forge the best record in the AL (35-18). If they can maintain it, they will earn the top seed in the AL playoffs.

Morton (2-2) allowed one run and five hits, walking two and striking out six. It was his best outing since leaving the injured list on Sept. 2 following a bout with right shoulder inflammation.

Ryan Thompson, the last of three Tampa Bay relievers, got two outs for his first career save. The Rays have had a dozen different pitchers earn saves, tying the 1973 Texas Rangers' single-season mark (since saves became an official statistic in 1969).

Morton struggled with his control at the outset, needing 51 pitches to get out of the first two innings. After the Orioles used a walk and two hits to load the bases with two outs in the first, Morton hit Chance Sisco with an 0-2 pitch to force in a run.

In the second inning, Morton knocked Jose Iglesias out of the game by hitting him with a pitch in the left wrist. The team called the injury a contusion.

Tsutsugo tied it with a third-inning drive and was hit by a pitch before Arozarena connected in the fifth.

With a full outfield and two capable players at shortstop, the Orioles decided another pitching arm was more valuable than utility player Andrew Velazquez, who was optioned to the team's alternate site. Velazquez played in 40 of Baltimore's 52 games before being cut loose after batting .159 with four steals. RH Evan Phillips was recalled to fill out an overworked bullpen.

Rays: C Mike Zunino (left oblique strain) is poised to come off the IL on Sunday. "It's not the ideal buildup without (rehab) games, but we feel he's in a good spot and should be 100 percent ready to go," Cash said. ... INFs Ji-Man Choi (left hamstring strain) and Yandy Diaz (right hamstring strain) both hit off the tee and are scheduled to take batting practice Sunday and Monday. "Taking BP is still a long way away from being in a game," Cash warned, noting that neither player has tested his leg by running hard.

Orioles: Manager Brandon Hyde made it official: 1B Chris Davis (left knee patellar tendinitis) is done for the season. Davis was put on IL on Sept. 14. The two-time major league home run champ finished with a .115 batting average, no homers and 1 RBI over 16 games.

Rays: Cash has not named a starter for Sunday's series finale.

Orioles: LH John Means (1-3, 5.68 ERA) has only one win in eight starts. In his last outing he did not get a decision after allowing just one earned run in six innings against the Yankees.